Athens       It would be hard to imagine a city with more experience in industrial tourism than Athens.  I’m en route to the 5th International Dialogue of the Organizers’ Forum (www.organizersforum.org) being held this year in Ankara and Istanbul, Turkey, and stopping in Athens changing planes on the way.

The signs of the 2004 Olympics are everywhere from the point one leaves the airport and travels on an obviously brand new roadway into the city.  As it happens, I was traveling in the rain, and an the fact that traffic could not move an inch and the small rain was overflowing the streets and gutters reminded one that the infrastructure was easily out strapped in this old city.

The Olympics, as you may remember, was expected to be a debacle in Athens.  Report after report in the run-up to the event kept insisting that Greece would not be ready and there was a fiasco in the making.  At the end of the day, everything was ready, but at a huge expense and Athens and Greece will be paying through the nose for years.  This was a huge bet on industrial tourism and it crapped out.  The crowds for the Olympics did not materialize, ready or not.  In fact the usual tourism for historic sites and cruise ships was off in 2004 as well, and reports here indicate that it continued to be off substantially in 2005 as well.  Many who built, staffed up, and renovated ended up very short and lost their shirts.  Meanwhile the crunch in this city has seen a steady inflationary increase with the advent of the Euro so that prices have made everything very dear while wages have continued to trail these new unfortunate realities.

Walking after the rain it was a little cooler, cleaner, and drier.  The Greek embrace of industrial tourism does seem to be protecting a little of what is left of antiquity, as least as I could make it out as the sun fell, with huge protected zones now fenced in and under reconstruction.  From a distance there was scaffolding all around the Acropolis area.  A big museum is scheduled to open next to the Acropolis as well in 2007.

But, an economy propelling a city of almost 4 million sprawling around these ancient hills in a total population of only 11-12 million that is based on industrial tourism is still going to continue to be a risky bet for a perfect world of excess income and unlimited leisure time that may or may not be the future just around the next corner. 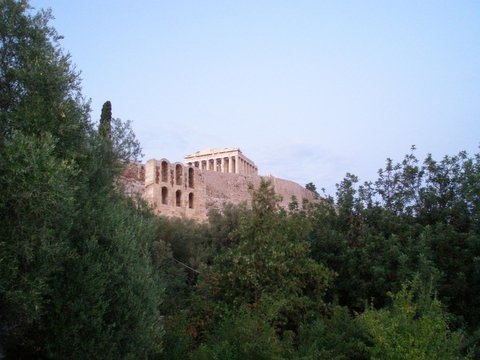