New Orleans       I was on the tarmac finally on the last leg back to New Orleans from Atlanta.  I managed to get my son on the phone for a minute in the middle of mid-terms to wish him well, and called my folks.  My mother answered and was relieved to have me back in-country, and put my dad on the line.  He mentioned he had been following my trip via this blog, which is something given that this will be the 393rd entry I’ve written, and I will bet this is the first time he’s used it to keep up with what’s happening with me.  He had a critique though.  He said there were not enough personal notes in it to suit him.  I told him that my companera had a “boundaries ban” on me!

But, if my dad is finally reading, by god that’s a request that needs to be answered, so here’s a personal list from my most recent road trip:

* I got to float in the Dead Sea.  Once I figured out how to keep the salt out of my eyes, it was great.  Reminded me of the Great Salt Lake in Utah.  Be hard to drown.

* In Amman, I really liked being awakened by the call to prayers a shade before 5 AM in the morning.

* My two favorite runs on this trip were one pre-dawn up to the gates of the Acropolis in Athens and another time running from Tismit in Istanbul behind the hotels and down the hill sides until reaching the Bosporus, where it started raining as I ran back up the hill to the park.

* Rich Hall and I stopped at Arafat’s Sweets in Amman on the way to the airport.  This was a Palestinian sweet shop named in honor of Arafat.  What they can do with nuts and honey is something amazing!

* I didn’t like Athens much.  It was all too much industrial tourism and too expensive.  I did enjoy having coffee on the roof top and looking at the morning doves in the palms and the Acropolis beyond them, and I did enjoy walking in the neighborhoods along Melina Mercuri Drive when I got lost and disoriented after finding the City Garden (which I also liked).

* Recommendation for suckers and those buying the lesson.  No matter what they say, a cab from Athens airport is outrageous.  In the traffic and rain it cost me 50 Euros!  On the other hand leaving Athens I took the Metro to the Airport for only 6 Euros, and it was faster!

* Cell phone service was terrible in Turkey.  T-mobile worked on the blackberry in no small part because it’s a German company.  Nextel worked in Greece and Jordan, but never a signal in Turkey, even though they had assured my office:  no problem.  On the other hand Jordan has the best cell phone signal you can imagine because of the lack of obstructions in the high desert.  Whether walking into Petra, in downtown Amman or at either end of the country — clear as a bell.  You may not care about this, but if I can’t work and be fully operational, I just about can not go there, so this matters to me.

* Raki, the national drink of Turkey, is actually pronounced “raku” contrary how all of our people pronounced it, and it’s pretty good stuff.  Brought you some, dad!

* I liked the little glass tea glasses without handles that they used in Turkey and bought six in Amman and brought them home and am using them now.
* In Amman garbage is kept outside in metallic bins for automatic pickup.  There are cats everywhere in the city!  In Athens there were dogs everywhere and no cats.  In Istanbul both.

* I noticed that people have portable computers, but they don’t bring them on the road.  Of the 20 folks in our Organizers’ Forum delegation I think I was the only one who actually brought my computer!

* There are “camel crossing” road signs all over the highways in Jordan.  I thought it might have been a hoot, and finally actually saw 3 young, wild camels running off the highway on Monday.  I also saw Bedouin camps and sheep herds everywhere in the country.  I liked the fact that none of the country was fenced in.  There were Bedouin cairns in different places, and I wished I knew what they were telling other shepherds?

* Rain!  I had not done the front end research on the weather this trip.  I assumed dry and hot.  I had the first inkling of trouble reading Orhan Pamuk’s insightful book, Istanbul, as I flew into Ankara when I noticed a glancing mention of bad late September rains and as special melancholy they produced.  Whoops!  My long time traveling buddy, Barbara Bowen, bought 2 umbrellas in our short stay!  I made it with baseball caps from Twin Ropes in Wyoming and the British Columbia Government Employees Union, but was drenched more than one.  Make a note!

* Though I started late, I was delighted that I did the right thing and got some books at the last minute and read them both going in, while there, and leaving Turkey.  It increased my understanding — and appreciation — for what we were seeing and doing immeasurably.  I’m going to have to make a note to do that again for sure!

* An our hero award has to go to Cigdem Ozbas, who technically was our interpreter, but was really so much more than that because she and our other new friend, Rifat Celebi, helped every step of the way in putting together the meetings for us and making the week really work.  Cigdem (pronounced chee-em) is normally a school teacher, but is an activist for sure!  Ironically, she was getting married (for the 1st time!) on Saturday, but spent 12 or more hours with us every single day.  We ate at her family’s restaurant once and got to meet some of her sisters-in-law and her husband-to-be.  She invited the group to the wedding, so some went!  Gary Delgado (my friend for more than 35 years who joined us on this trip now that he is leaving the Applied Research Center www.arc.org) and I went by to meet her 75 year old mother who was lovely and elegant.  Cigdem taught us how to say hello with Turkish respect by kissing her hand and then touching our forehead to her hand, which was a great lesson.  Cigdem was a special treat and huge addition to the whole trip in Turkey.

* Big ups to Rick Hall for the same reasons in Jordan as well as being a generous and gracious host, great cook, and boon companion for the days I was getting an immersion experience in country with him.

* Emil, an intern in Amman with Solidarity Center, was good company on the trail through Jordan, and turned me onto Om Kolthoum, the popular Arabic singer from Egypt.  I was moved by him saying that 4,000,000 people lined the streets of Cairo when she died.  With time to spare before my 3:40 am departure from Amman, I tracked down a CD from her, and liked it — thanks, Emil!

I could go on and my dad might appreciate it, but I might lose the rest of you, so enough said, it was a fascinating tour with the Organizers Forum (www.organizersforum.org) as always, but it would not be complete without a few words from home.  I couldn’t believe that gas was so cheap (a 70 cent drop!) compared to when I left the country.   The grass was way too high in the yard.  The dog was delighted to run this morning with me.  We noted the progress on the two houses being build a couple of blocks away and the lack of progress in a couple of other areas on our route.

Mainly, as great as the trip was, it is still hard not to be giddy to be back home back and work and to find the value of your own place still has such high currency.

Missed you, Dad, and will see you soon! 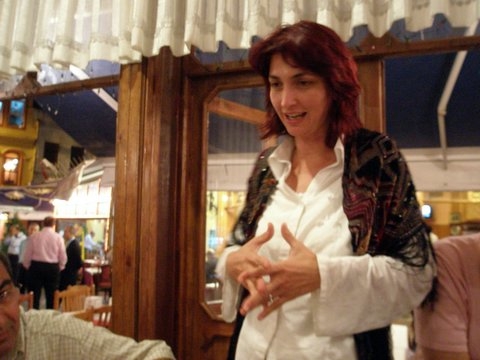