Cleveland      The ACORN National Board met in Ohio anxiously to hear the report on the prospects for the four state initiatives to raise the minimum wage that ACORN has supported and carried forward in Colorado, Arizona, Missouri, and Ohio.  Marty Keith, the chair of Ohio ACORN, Zach Polett, the ACORN National Political Director, and the Ohio canvass and campaign managers gave a very encouraging report on our prospects for victory now only a couple weeks from the election.

Polls seem to indicate that barring a last minute assault that we are in good shape to win in all four states with numbers in the 70% support range and higher.  Victory would be very, very sweet, since more than 2 million workers would immediately see their pay rise in these four states and there ripple affect would be even greater.

A critical element in all of the states has been a huge door-to-door canvass effort that we have mounted to turnout our vote.  In Ohio the report indicated that we had about 350 canvassers working daily under a salaried staff of 32 people and had contacted 128,000 voters to date with a goal of 300,000 voters by Election Day.  Their will be four “touches” on the people identified in this manner to make sure they show up to vote.  Response from our canvassers has indicated support from 76% of the people, so it really seems just to be a matter of getting our votes to the polls in these states.

Zach was asked a question about the cost of these campaigns, and it has not been cheap to convert votes to wages:  $10,000,000.  Our team, he indicated, raised about $3 M of the $10 M.  Not sure that this counts the additional money — more than a million in the case of Ohio for example — that it took to actually get the measures on the ballot.

The ACORN Board made it clear that they supported the fights around wages enthusiastically.  More than a dozen of the board members jumped immediately from the meeting to van down to a rally for the minimum wage in Akron.

The board also voted unanimously to support a post-election initiative to immediately follow-up with what we now (crossing fingers and toes!) hope will be a huge set of minimum wage victories to try to “clear the table” and move forward even more aggressively.

A bit of gallows humor perhaps gives the backstory  that is moving ACORN’s leadership so aggressively.  Someone recently was talking about fixed income and someone else quickly quipped that it used to be that fixed income mean pensions and social security, but now it seemed to mean all wage earners. 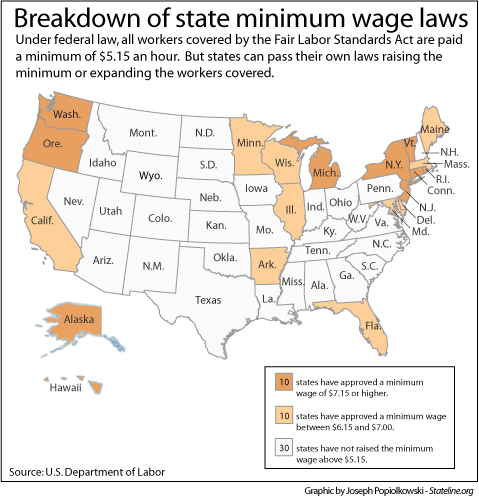