New Orleans         A letter was faxed in the afternoon from Senator Charles Grassley, Chair of the Senate Finance Committee, to ACORN’s President Maude Hurd.  It was 8 pages in length with about 60 questions asking for a world of information (a list of all ACORN employees, a list of all ACORN funders, and on and on and on) to be delivered electronically to the Committee in one week’s time — not long before the election of course.  The first paragraphs reeked of the politics running behind the letter as Senator Grassley attempted to draw an analogy to the abuse of tax exempt organizations by convicted casino lobbyist Abramhoff and their attempt to see if they could tarnish ACORN in the same way.

There were two threshold misunderstandings in this desperate attempt to subvert the minimum wage increases rolling towards victory at the ballot box on November 7th.  ACORN is not a 501c3, tax exempt organization, and ACORN does not received government funding.   Someone on the Senator’s staff seems to have fed him some wrong information so his letter attempts to build a castle in the sky.

Not surprisingly we had two press calls virtually before we could pull the letter off the fax, one from the Dow Jones wire, which means our rabid, anti-minimum wage increase buddies at the Wall Street Journal were gearing up to go whack on this theme again.  With two anti-ACORN editorials in two straight weeks, the WSJ is clearly gearing up for a trifecta.

Our statement respectfully declines to get into a political ruckus with the Senator and maintains the focus on getting our people out to vote and winning the minimum wage increases.  It follows below:

ACORN is proud of our work in helping low and moderate income citizens participate in the American political process.  We are also proud of our leadership role in bringing forward the initiatives to raise the minimum wage in Ohio, Colorado, Arizona, and Missouri.  In support of these ballot initiatives ACORN has completed non-partisan voter registration drives that have helped about 500,000 Americans gain the right to vote for the first time, and we are overjoyed at the new opportunity these citizens have embraced with our assistance.

ACORN and our 250,000 family members have tremendous respect for the United States Senate and its Finance Committee and Senator Charles Grassley.  A letter signed by the Senator was received in one of our offices.  Our lawyers are currently reviewing the letter and advising us of the appropriate response, which we will make once we receive their input..

Two things are certain.  One is that ACORN is a non-profit corporation registered under the laws of the state of Arkansas where we were founded, but we are in fact NOT a 501c3, charitable organization under the code of the Internal Revenue Service, so we fear that Senator Grassley has been misinformed on this issue and therefore made a series of unfortunate generalizations on the basis of this incorrect assumption.  Secondly, ACORN is not funded by the government, which seems to be a second incorrect assumption.

We are sure that this overly broad and somewhat ill-founded letter can be handled swiftly once the committee’s confusion about ACORN is clarified.  We sincerely hope that this letter is not politically motivated and intended to dissuade newly enfranchised voters from their first participation in the electoral process at the touchstone of our democracy.  Nonetheless, ACORN is categorically committed to making sure that lower income and working families have the opportunity to vote, and we will neither rest nor be intimidated in our efforts to see a victory for working people and increases in the minimum wage on November 7th.

Looks like it will be a fight to the finish! 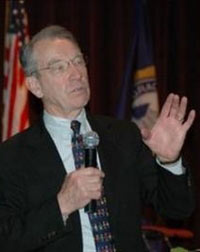