Delhi, India  Our panel at the ISF was under a giant wrap of muslin holding about 300 people. There was space for translation, but no translation was provided, so the session was to be in Hindi. We had pitched a big tent on the topic: Foreign Direct Investment (FDI), Special Economic Zones (SEZ), and the Corporate Hijacking of Retail — Impact on the Agriculture and Retail Sectors.

Events were swirling to produce virtually an anti-corporate movement in retail. What had started as a problem of stopping the amendment of FDI in retail to allow the entry of Wal-Mart and its international wannabes was now spreading in its impact as local conglomerates, particularly Reliance, tried to move with huge government assistance to seize the market by copying the Wal-Mart distribution model and store system having recently announced plans for 4000 stores with one opening everyday and many being built even now as we spoke The Reliance developments had focused our campaign from one of foreboding to a prediction of events that were unfolding before the country now. The events were huge in their potential and devastating impact, but our timely was superb in building and enlarging the campaign.

The panel was a collection of heavyweights as well that had been carefully assembled. The leadoff was Vandana Shiva of Navdanya, whom I had met on my last trip to Delhi and who had become a staunch friend and ally of the campaign, understanding importantly how her internationally recognized efforts to protect indigenous agriculture and livelihoods would be threatened by the Wal-Mart onslaught and increased corporatization of retail food supply and distribution. Vandana had hosted a dinner at the Navdanya offices the night before the panel in my honor, but more as a good exercise in bringing the speakers and allies together. She lit up the room with her passion on these issues. Navdanya means “seed” in Hindi and her comments later about the fate of linking Navdanya, a seed, with ACORN, the seed of the oak, were powerful.

We also had an array of speakers and sponsors who had become our committed partners and allies in the campaign because they potentially stood to lose millions of jobs from these changes. Of course the Confederation of All India Traders (CAIT) and its leader Praveen Khandelwal was still in jail, but Saktiman Ghosh, president of the National Hawkers Federation based in Kolkata was there in full strength with his delegation. So was Sodan Singh, the leader of the National Alliance of Street Vendors of India (NASVI). The Harit Recylers Association (HRA) on the downstream side of the distribution channel was also there and its leaders led some of the most exciting and rousing chants I have heard in years. The chants were synchronized so that on the beat the arms shot up in a fist from the crowd.

As additional weight to the program we had Member of Parliament Sri Abani Roy speak who shared with the crowd and later with the press the letter form Congressman George Miller warning of the abuses of Wal-Mart in the USA. Surekha Dalvi spoke about the impacts of the SEZ developments as government subsidized and supported competition zones for everyone. From the labor movement one of the leaders of the Confederation of Indian Trade Unions (CITU) spoke about the impact on labor in the broadest terms. In a moving address we also had Sri V P Singh, a former Prime Minister, now retired and a slowly moving sage, who held the crowd with his warning about the potential impacts. Medha Patkar of NAPM came in to help link the impact to the fight against seizing agricultural land and the creation of displacement.

Vinod Shetty, our lawyer based in Mumbai and a known and respected activist, had drawn the straw as moderator from our India FDI Watch campaign. Vinod also translated my remarks concerning the lessons ACORN, WARN, and the Wal-Mart Workers Alliance had learned in fighting the company.

At the end of my presentation I offered to teach the crowd a chant from our work in English, “The People United Will Never be Defeated.” They tried hard with much laughter and good spirits as fists raised across the void of language momentarily creating one world in a fight that needed to be won. 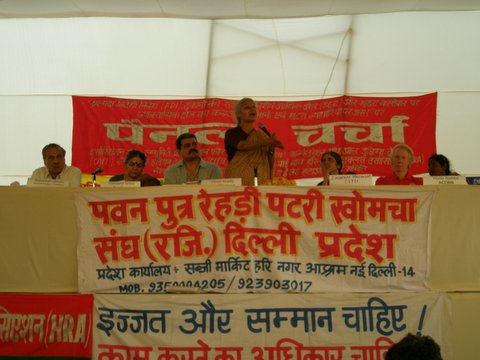 From the left, MP Abani Roy, Vandana Shiva, Vinod Shetty, Hedha Patkar, Ranjana Nirula (CITU), me, and Brinda from our Bangalore office who was translating for me.