Delhi, India  The papers were full of the new of the latest purchases of the giant Tata operations that had moved a protected state steel monopoly into a multi-national steel giant and the largest steel combine in the world. More titillating than their movements into steel in middle of the United Kingdom was the recent announced that their hotel operation had bought and would soon rename the venerable Boston Ritz-Carlton as the Taj Boston. Our interest was more in Reliance which had grown and diversified from its original roots as an electric supply and manufacturing operation and was now preparing to “walmartize” Indian retail and food sales under the name of Reliance World.

Reena Desai, ACORN International’s India FDI Watch Campaign Manager based in Mumbia, and I sat down in a back booth of the India Social Forum on Sunday afternoon and shared notes and worries with one of the premier international campaigners, Amit Srivastava, director of the San Francisco based India Resource Center which has spearhead the international anti-Coca Cola campaign and been the architect of the huge mass based efforts to shut down Coke and Pepsi bottling operations in South India particularly. From the beginning of our international Wal-Mart efforts and especially the anti-FDI in retail campaign in India, I had reached out to Amit and sought his advice via phone and email, but ironically because of his constant travel between the Bay Area, London, and India we had consistently missed meeting each other. We had finally gotten a fixed date to visit in SF more than a year ago, but Katrina blew it away.

We had both an opportunity and a challenge. The emergence into retail of Reliance with its immense bullying power in the Indian economy had helped crystallize our anti-FDI campaign, because finally everyone understood what a Wal-Mart might mean as they saw the development of Reliance. Now our alliance was seeing two streams come together between the concerns around FDI, which had brought us to the table, and now the immediate threat posed by Reliance. The names of the two companies were linked in every sentence from our allies’ mouths. Amit faced similar problems with his more mature and advanced efforts with Coke, because despite some significant wins and great exposure, the campaign was still challenged politically and at the base.

Besides sharing some hand wringing though it was exciting to contemplate joining efforts with Amit and his operation and looking at the potential for a joint effort focused on Reliance and what it might mean to the fight. Amit and the India Resource Center offered to be helpful there, and it was help we needed.

The shadow of Reliance in India is long. In our next visit we met with Ashim Roy, the elected leader of the New Trade Union Initiative (NTUI), a fledgling new federation forming in India largely among private sector workers and offering a common umbrella for many independent union operations. After hearing Brother Roy talk about their progress, membership, and founding convention in the spring in Delhi, as we stood to leave, I asked if any of the NTUI affiliates had units within the Reliance holding. Ashim laughed and said, essentially, this was where he came into the fight, having led and lost a strike in 1984 against a Reliance electrical part manufacturing operations where he worked in Gujurat at the time.

The campaign is making progress, but our hardy ban and our erstwhile allies are facing some of the biggest time operations in India and the world. I would like to be able to go on the field a little more Goliath and a little less David, but ACORN is fighting with what we have and looking with some luck for lots of help. 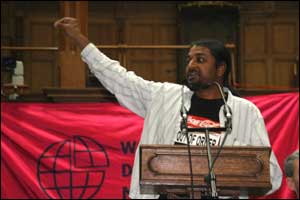