Delhi, India  The India Social Forum is an off-shoot, a first cousin of sorts, of the annual World Social Forums that have been growing from their original roots in Porto Allegre, Brazil, to know embrace a world of social movement work. The ISF was the first outing for this enterprise in India, though the World Social Forum had its annual January affair, and first non-Brazilian adventure, in Mumbai in 2004 almost 3 years ago now.

It is hard to “like” the social forums in the normal sense, because these are frustrating, disorganized, chaotic affairs that try the souls of organizers looking for a linear world. The social forum experience is something more along the line of an experience. If you can ride the anarchistic wave of people, events, noise, and struggle and find a piece of dry land where your own program can seek some real space, then it is worth the ride. If not, you simply drown without a sound! Of course in Delhi, there is a lot of parched, hot dry ground with dust rising everywhere and fetid smells and acrid air that overwhelms, so it is not surprising that water metaphors start to come quickly to one’s mind, because you pray for a sea breeze or some water somewhere.

The other common complaint is also that nothing really happens at a social forum. No decisions are made. No program is fixed and focused. This criticism is less fair in my mind, because after all, a social forum is in this way, exactly as advertised, meaning a forum of social movements of all manner and descriptions, or what we refer to in the States as a “meeting of the tribes.” As frustrating as this is for many of its left critics particularly who have troubling abiding these events, the format of a social forum is such that it allows a smorgasbord of events, groups, programs, activities, and people, and if you have no agenda, you are swamped. Whoops, back to the water!

For a fledgling organization in India and for our presumptuous campaign around bringing together a large coalition of support for our efforts around foreign direct investment (www.indiafdiwatch.org) , the ISF was an opportunity to sort through a lot of people and groups and perhaps to ratchet up our work a notch and operate in a larger venue. In the first afternoon after I arrived in India, it was initially an opportunity to see some of the more interesting, emerging mass organizations and how their leadership operated.

I sat through several hours of a workshop on urban housing issues. There was a lot of energy among the groups, who would often march in with their leaders in order to give their presentations and thoughts on the issues around the need for more land for settlements. One of the most interesting was Medha Patkar, a fiery spokesperson for NAPM, the National Alliance of Peoples’ Movements. She is an important and controversial leader in India. She if from the Gujarat area of the country and initially came to prominence leading opposition to dam construction. She also is difficult in India having first courted and then spurned left alliances. NAPM initially was thought to have ambitions to emerge as a party in its own right, but seems to have found a place as an independent voice. Recently Medha Patkar and her organization had joined our anti-FDI in retail campaign, so it was interesting to watch her in action. Similarly, a group called YAVU seemed to have a real base among the urban poor with a solid grasp on housing and settlement issues and looked worth watching.

Understanding the space for organizing in a country, especially as ACORN finds its footing with the FDI campaign, is valuable for a fledgling operation such as our own, and it is frankly inspiring and exciting to listen and watch other organizations where one feels kinship across the language because of the passion in the speech, the similarity of the issues, tactics, and strategies, and the hopes for the future. 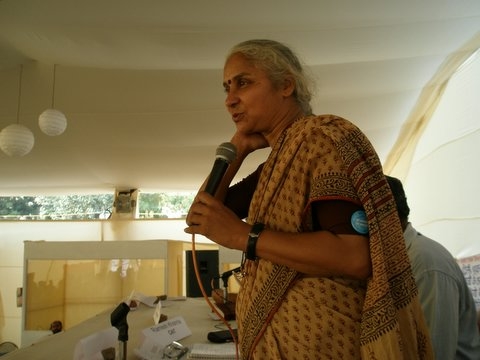