Beijing     It would have been late in the States, but it was midday in China as we watched the news and constant speculation that Saddam Hussein was quite possibly being transferred from American to Iraqi hands in preparation for his execution. There is an other worldly quality in seeing what passes for “breaking news” when one is sitting in the future watching people prepare for the past. The speculation was that before dawn, Saddam could die. We were watching the snow fall in Beijing as events went the way that they were forced to proceed for reasons unclear to anyone here.

Last year we were barely past Katrina at this time of the year. We were in the central highlands of Mexico between Zacatecas and Aguas Calientas glad to be in the dry and high. We were hoping at the New Year to be back home and back in the office with enough construction done that we could start to rebuild the world we remembered.

The year before we were in Madrid riveted to the tragedy of the tsunami and soaring estimates that were realized in horror as hundreds of thousands died in the walls of water.

These are tough times of the year for people. There is certain nostalgia for simply making resolutions with or without ever meaning to keep them, rather than being caught in the shadow of events bigger than we could imagine.

We will spend New Year’s Eve traveling backwards. Leaving early from Beijing to Tokyo again, spending much of day in Narita Airport, and then catching back up with time flying across the world back to New Orleans by 6 PM. In some ways such a bubble allows our crew to be insulated enough to think about what needs to be done in the coming year. We have time to spend in an aluminum cocoon to sort out the lists for many tomorrows.

And to wish everyone a great, successful, and safe New Year! 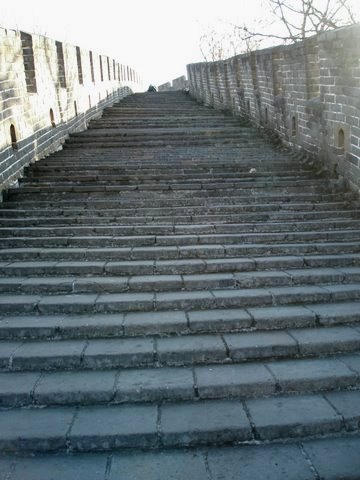 Beijing    Labor, whether organized or unorganized, is under some pressure in this part of the world, just as it seems to be in so many other countries.

In Japan we stumbled into the news that the union density fell for the 31st straight year to 18.4% with more than 10,000,000 members. Indeed better than the situation in the United States, but not good news even though part of the global pattern.

While in China we followed the debate about passage of a labor law to protect workers. There is something incongruous about a debate in a communist country about worker protection. One would think it almost automatic, so it was strange to read of the delays and the back and forth because multi-national corporations were pushing back for modifications in the law.

It was also surprising to see how typical the concerns. These were basic protections against working too many hours with too few breaks and pay at less than minimum standards. There was nothing fancy here just simple standards to safeguard worker exploitation in the usual, almost mundane, ways. That foreign corporations were even bothering to resist such simple stuff speaks to the huge role that they must play in driving the industrial and export machinery of the “new” China.

The old China was centered on the “work unit” that was the central identification of each worker and the basis for the iron rice bowl dating to the times when close to 30% of the workforce was employed by the state. Now that number is still high though less than 20% and though the work unit and its identification is still significant, there is a recognition that workers are on the move and migrating to fill the labor needs as they arise and call to work of all kinds, particularly in the burgeoning coastal cities.

This is an unsolved problem that passage of some kind of labor law, though perhaps embarrassing to the old central committee, has made necessary for the millions and millions of workers who are now off the original grid and caught in the changing flux that speaks to China stepping out in the 21st century. We don’t understand much of this from the conversations we have here and there, but all of us notice the difference in a China in ascendancy. This is a country and a people that seem to sense that the future is theirs, not ours, and are stepping stoutly into it. We are not used to the notion of not having some special kind of American “free pass” card, but there’s a lesson to learn here about having to relearn our place in the scheme of things if we are to find our way into the future.

We are not the only ones who can tell things are different here. A piece ran while we were in country about the fact that Wal-Mart had opened its stores for offices of the Communist Party to be housed there. The Party said that it was not going to interfere in management, but was going to help make sure that Wal-Mart workers were “exemplary” employees. This is not Mr. Sam’s Wal-Mart, anymore than the world is simply our playground anymore! 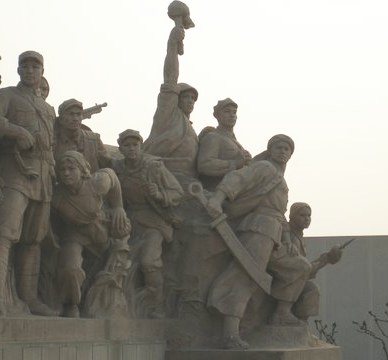 Statue in Tianamen square in front of Mao’s Mausoleum 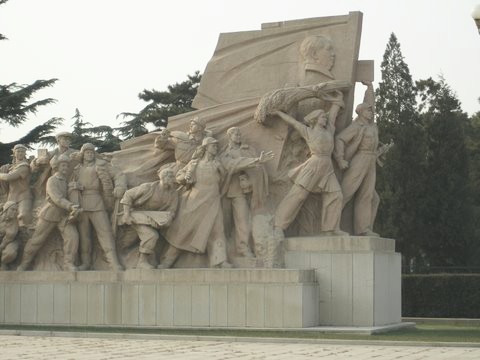