Shanghai    Tokyo was a modern, industrialized city, and landing in Shanghai one immediately steps into the reality of what it means to become a modern, industrialized city. Shanghai soared past 20,000,000 people last year by official estimates as it continues to be a Mecca for jobseekers from around China. Of course that is nothing seemingly next to the 33,000,000 plus in metropolitan Tokyo, but Japan has gotten used to its size in some ways, while Shanghai, though the largest city in China, is still trying to wrap its arms around its teeming masses of people.

The air is the first sign of real trouble, and it does not get better as you get used to it. This is the air of Pittsburgh when they the Untied States were still making basic steel or Denver during an inversion before catalytic converters or New York City in the late 60’s or early 70’s when your handkerchief went from white to black in the course of a day. This is evil, nasty, wicked, life-limiting stuff where you can see the particulate matter and could eat it with a spoon. This is not a haze, but hardcore pollution!

It is not worth pointing fingers. What is not coming from one of the more than 150 industrial zones in greater Shanghai is coming from the rest of the city which seems to be one solid 24/7 construction zone. This is a big, burly knock-em dead town from start to finish.

Making our way through the haze, downtown was a neck binder with one skyscraper after another reaching for stars that none of us could see. Tokyo seemed smaller in contrast and more low-slung 50’s, while Shanghai seems to be an architect’s must-have stop on the way to being somebody. Each garish building seems to be a height and weight class competition with the next.

When the red ball drops off the horizon, the city erupts into a light show downtown at least until mid-night when all the lights seem to go off at once. The total impact is quite spectacular and, frankly, thrilling.

This may be the city of the future, and at first glimpse, we had to wonder if we were truly ready and whether or not we could really hang.

Obviously, I immediately feel in love with the place!

This is not a haze, but hardcore pollution
The Marriott building in the late afternoon smog 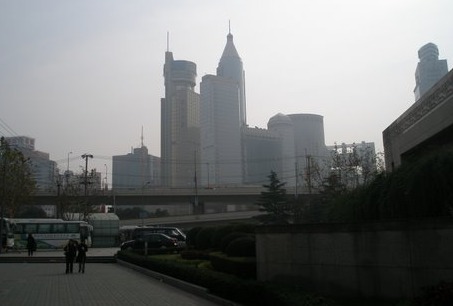 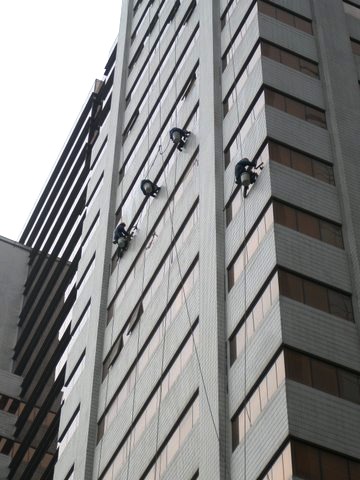