Beijing    The South China Morning News published in Hong Kong published two full-pages on the story. CNN and BBC both flashed the crawler along the bottom of the screen that even Beijing was reporting internet slowdowns. Financial markets, trading houses, and regular businesses were virtually shutdown.

The problem was simple: an earthquake in Taiwan. Undersea cables were broken and seemed to indicate that without help it would take weeks to repair. Suddenly this part of the hyper-cyber world had crashed to virtually a halt.

Here in Beijing we were a footnote on this story. Outlook express was impossible to access on broadband. It took a full day before I could access ACORN’s webmail, which moved faster through “squirrel mail” as it calls itself. Pictures for these blogs were only able to be sent on g-mail via picasa2, and then today that crashed as well.

Running early this morning in the pre-dawn on a park carved out of a neutral ground along an expressway (or what they call a carriageway on the street signs here), there was a humorous statue of a Confucian with a Fu Manchu beard looking intently over the shoulder of a young woman in a short skirt at her laptop computer as she sat on the park bench. Nature has a way of proving that technology, no matter how seemingly essential to daily life and commerce, can still be rendered irrelevant at will. We were reminded of this same problem during the days of Katrina we were reliving with our group as we traveled around Beijing today.

Within a half-hour we were in rural China on modern highways watching men working with bicycles and carts collecting twigs and sticks to bring back into smaller villages to use for cooking and warmth. Within an hour we were at the base of the Great Wall built more than 500 years ago (which incidentally can not be seen by satellite or from the moon).

Yet, the connections from virtually all of Asia were compressed into what seems to have been one underwater cable that ran to Taiwan and then onto the United States. The alternative routes were being flipped on, but the volume was such that everything was “timing out.”

Toggling between 1000 years ago and the future was a wild experience for our team in China! 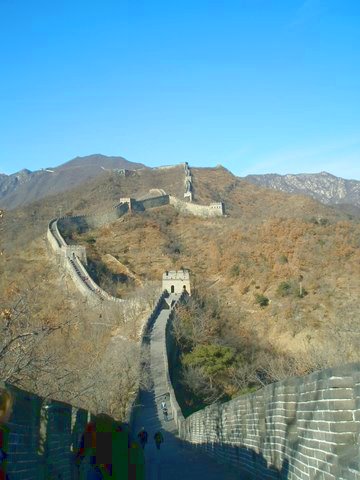