Bejing    Brown is the color of Bejing, just as it was Shanghai, but here at least this is less a matter of the air than the stark and almost barren landscape everywhere around the city. Everything was clearer partially because we read that the weather was changing. A front was coming in from Siberia which would clear the air and sweep away even the fog that had been sitting on Shanghai and dripping on our mornings in a Blade Runner fashion. This bleak landscape seemed more cold and foreboding than it really needed to be, because the latitude makes the city no colder than Philadelphia or Madrid that lie along the same reach. A Siberian front is no worse perhaps than one coming straight down from Canada, but it surely sounds like a problem of a new and different magnitude.

We were ensconced in a hotel in the tourist zone, so in that sense there is no reality for us here. We also would need to hit the iconic locations and see the Great Wall, walk in Tianamen Square, and look at the Forbidden City. The most famous tourist here was still Marco Polo after all, so we would follow the footprints in our own way. A city of 11,000,000 people though is the same size as Buenos Aires, but we felt we were pacing off blocks on a smaller grid in our own separate maze.

Bejing is not Shanghai. There is more of a feeling of police and soldiers everywhere, perhaps simply because we were walking at the edge of the national government of course, which is much different from the boundaries of commerce and enterprise. Decisions are always guarded more than money.

Police more quickly yelled at us to walk in the lines when crossing the streets. In Tianamen Square while we were gawking and rubbernecking at the classic views, I watched a laborer with a small bag simply accosted by a police and a soldier to stop and state his business. He was immediately surrounded by several more security and military. The questioning and conversation went on for some time and had not stopped at the point we also moved on about our business. Probably nothing, but the feeling was different here. 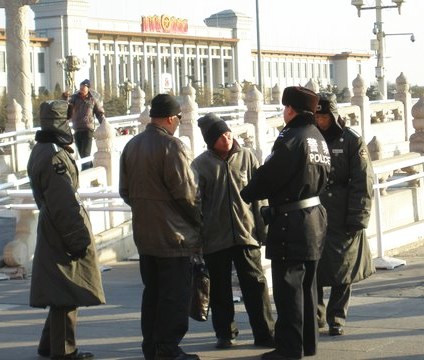 Laborer accosted by police and soldiers 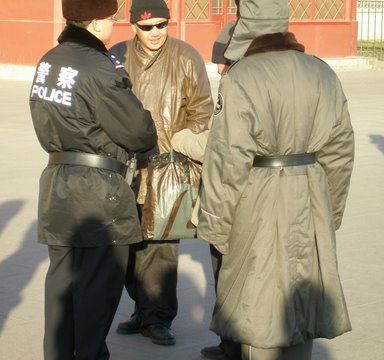 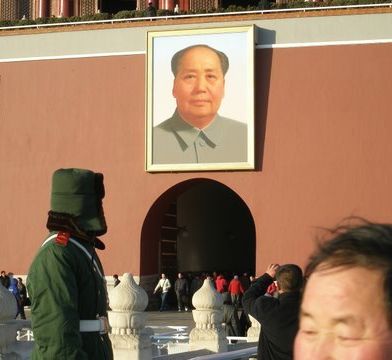 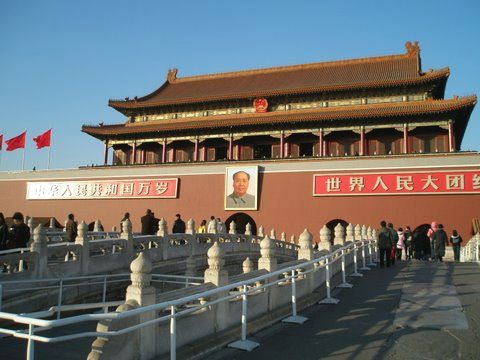