New Orleans I know a lot about non-profits and their finances. A whole, whole lot! It’s actually an area where I’m an expert. If I found out that we showed up in someone’s will for $33,000,000 — dang, how many zero’s is that? — I would be dancing in the street! I don’t want to even think about what we could do with that kind of money in the US and around the world.

But, it turns out that is just me. Maybe it is you, too? But, it’s definitely not the Salvation Army.

A fellow named H. Guy Di Stefano recently died. His wife had been an UPS heir. They didn’t sell the stock, even after she died. When Di Stefano passed on, he divided the estate to 8 charities including some local Santa Barbara outfits and some national outfits that they had supported, including Disabled Veterans, World Wildlife Fund, Salvation Army, and Greenpeace International. The fortune was huge, so each fair share would have been about $33 Million large.

Not good enough for the Army of Salvation, as Tracy Chapman called them in an old song. They sued saying there was a slight change in the name of Greenpeace International in recent years which through a reorganization had reduced its number of corporations (we all get this advice all the time, too!), and created a successor corporation called the Greenpeace Fund. So for a shot at another $4 Million, the good hearted, little beggars at the Salvation Army put their lawyers on seeing if they could bump off Greenpeace and rip-off the money.

The other beneficiaries have not touched this one with a pole. None of them had known in advance they were going to suddenly benefit from this windfall. The intentions of the donor and the estate were clear and unambiguous. At best this is an action hiding behind a technicality.

The Salvation Army looked the gift horse in the teeth and just started counting them.

I have to ask the Salvation Army if they are really eligible for any of this money. The donor seemed to believe that he was giving his millions to a charity. The Salvation Army clearly has no earthly idea what in this world or the next is meant by charity.

This is nothing more than gross avarice and greed. What is wrong with these people? 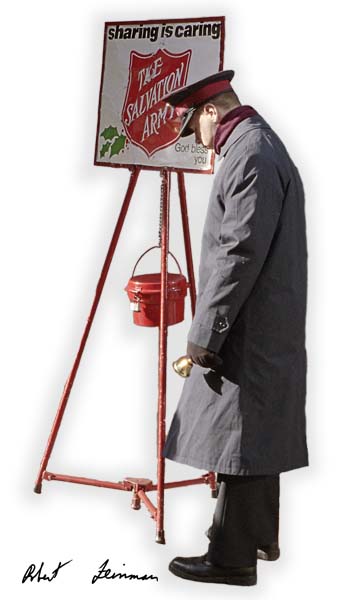 Salvation Army volunteer with bucket in front of store