Orlando WARN and all of our allies went to the first reading and hearing in Orlando for the Big Box Ordinance in the County on Tuesday night. I had come in for meetings with the staff and, originally, for the hearing until it was scheduled for the evening rather than the morning at the last minute. We had won a moratorium on any big box construction over the last year while a study committee had worked on a comprehensive ordinance (we were represented on the committee), which if passed would be the best in the country outside of California.

The report from Rick Smith, WARN’s Florida honcho, indicated that the hearing went well, but that the companies were making an aggressive assault on some of the provisions, particularly the restriction on new construction within 10 miles and close to schools and other public facilities. All of this set the context for an email I got from our friend and comrade, Debra Booth, the head of the Central Florida AFL-CIO, as I changed planes in Houston heading home late at night.

So you have heard the proverbial line, you wouldn’t believe what happened on the way home from work today! Well this one is hard to believe. Tuesday, March 6th the Orange County Board of County Commissioners held a public hearing on the Big Box Ordinance for Central Florida. We had tremendous support from the community with virtually little opposition from anyone in the community.

There were the typical attorneys representing Home Depot and Wal-Mart. The County was submitted the language and heard from their representatives on the Task Force. Testimony was taken at the Public Hearing and I had to leave early so I could finally get home before my daughter was asleep. Now comes the fun part….so on the way out…A guy that I know that is the Republican consulting firm that represents the County Mayor is standing out in the hallway. I started talking with him and then all of a sudden a gentleman comes up to the two of us and starts chatting and holds out his hand to introduce himself. His name was Eric Brewer, Director or Public Affairs for Wal-Mart. So needless to say, he already knew our backgrounds. He proceeded to ask me what I thought about the partnership developed between Wal-Mart and SEIU regarding the Healthcare issues.

Debra then asked what in the world was he talking about — are we supposed to be buddies or something.

Yes, Virginia, there may be a Santa Claus, but, no, Debra, there is no “partnership” between SEIU and Wal-Mart!

Andy Stern, President of SEIU, and Lee Scott, CEO of Wal-Mart, along with other business and labor titans did a press conference a couple of weeks ago essentially saying that the health care system in the country was in crises and out of control, and even usual adversaries in business and labor have come to a common understanding that something has to be done to fix this problem legislatively. This was more PR than partners. We’re not buying a ranch together; we’re just riding some fence and trying to see if we can fix it.

It is easy to get confused when the lines start blurring, and clearly the Wal-Mart public affairs guy lurking outside of the Orlando hearing room would like to have someone believe that SEIU and Wal-Mart had suddenly become childhood friends and bath tub buddies, but keep your eyes on the ground and not the spinning top, because we are a long way from burying the hatchet with this outfit.

Unless it’s in between the company’s eyes! 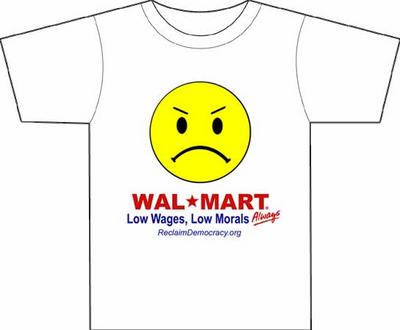