New Orleans        I got an unusual tip from Janet Reasoner writing from the windswept, snowy plains of Wyoming to take a look at a piece in the German magazine, Der Spiegel, about renting protestors.  Yes, renting people to participate in your demonstration.

Seems a web based company called Erento.com based in Berlin pairs items with the market trying to rent everything from snow machines to private jets to, well, protestors.  The company lists more than 300 profiles of the potential demonstrators.  The profiles list “preferences” in terms of where the protestors would like to work in terms of geography.  Some would be willing to work all over Germany, while others would prefer to “work” within a shorter haul from Berlin.

Some of this reads like a modeling agency!  Der Spiegel nails the matter this way:

Judging by their profiles, most of the 300-plus people currently listed in the “rent a demonstrator” category are young and attractive. Potential agitators looking for support for their public protests can choose, for example, Steffen, age 22, 190 cm tall (6 feet 2 inches), “athletic” and with a shoe size of 45. He’s available for gigs all over Germany, but says he prefers the state of North Rhine-Westphalia. Or Manuela, who has green eyes and “very long” hair and is available within a 100-kilometer range of Berlin. Included in the extensive personal information — which at times seems more suited to a dating site — are skin color and “appearance type,” which can be for example “European,” “African,” “South American” or “Asian.”

Business is business so I was curious about the cost.  The going rate seems to be $188 for 6 hours of “work” or about 145 Euros.  The company takes about 5% as a management fee, leaving the remainder to the demonstrator.  The lowest rate seems to be about 10 Euros per hour or about $12+ per hour.

An association of doctors got into some controversy for renting about 200 of the protestors for a lobbying event.  Their spin in response was somewhat unique.  They argued that it was simply a public-relations effort rather than a real protest.  Huh?  I’ll have to think about the differences and distinctions there for a bit.

Is this just a European phenomenon?  No way.  It may be a bit more out there than makes everyone comfortable, but there is an active market for the same kind of activity in the United States.  Increasingly in the world of web protests populated by a faceless base, when forced to have to show real people, too many “groups” on the right, left, and middle, are forced to “rent” a base or find a partner that still does the hard work of building one from the ground up. 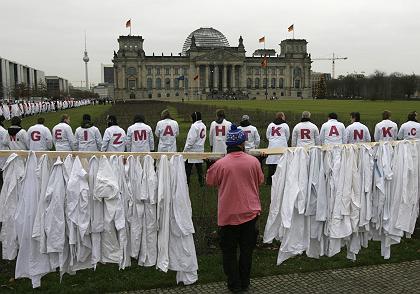 Loud public protests accompanied the recent revelation that doctors had hired protesters for a December demonstration in front of Berlin’s Reichstag.