Tampa Sitting with the WARN staff in the office here reviewing our work with Wal-Mart throughout central Florida, it was fun to see the Google alerts coming into the blackberry indicating that we were in the news as the company feels the pain.

First there was an analyst report by equity researchers at Bank of America about the particularity of site fighting. The researchers estimated that in contract and staffing costs to fight the assault we and others have waged that the company is spending $10 Million just to tread water. In lost sales from stores not opening the number was around $4 Billion!

Then we read the MSNBC.com where reporter Allison Linn had detailed the problems the Wal-Mart was having building stores nationally. She particularly highlighted the role that ACORN has played and that WARN has pioneered in central Florida. As Ms. Linn indicated, “Experts say the groups are having an impact.” An analyst C. Britt Beemer highlighted the likely problems Wal-Mart would have with “domestic growth.”

We particularly enjoyed the quotes from the company that acknowledged that we were giving them fits. Eric Brewer, director of public affairs for Wal-Mart’s southeast operations was clear that WARN was hurting them. In the article Brewer said,

“…citizens do have legitimate concerns when a Wal-Mart comes to town, such as how it will look and how traffic will be affected. But he accuses WARN of ‘just out-and-out attack using full-time campaigners,’ instead of truly trying to meet a community’s needs. Still, Brewer concedes that efforts by WARN and others have proven time-consuming and costly for the company’s Florida operations. ‘We have certainly hit our targets of growth, but we have had to match their efforts (with) our own,’ he said.”

Take if from Eric Brewer, the company knows that they are in a fight with WARN and ACORN and everyone is starting to accept that we are giving them all that they can handle. 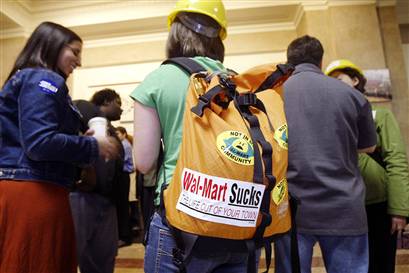 Anti-Wal-Mart protesters gather outside a Chicago City Council meeting in 2004.