New Orleans Speaking of Hawaii, an item caught my eye the other day about some wild scheme in the islands, which reminded me of the famous TV show of decades ago, called “The Millionaire.” The show’s concept involved a fellow representing a reclusive millionaire named something like John Barsford Tipton, who would cold call a house in some neighborhood and give the folks a million dollars, thereby turning their whole lives topsy-turvy. The show was designed to look at how money changes people, and I’m sure the moral must have been that we were ok if we were poor as dirt.

Now a normally reclusive Japanese billionaire, Genshiro Kawamoto, who made his money on real estate speculation, has started a deal where he has bought 8 or 9 houses in an exclusive area of Honolulu, called Kahala. He let it be known that he was going to let the homeless live in these houses, and 3000 people wrote to him asking to be picked.

When I first read the piece, I thought that he was giving the houses away to the homeless. Seems that instead he is letting people live in these million dollar plus houses for free (at least no rent), but they have to pay for the maintenance and upkeep. He filled the swimming pools with rocks to decrease the maintenance cost for example. Regardless, poor families are virtually standing in line for the chance to live with the swells in a modern version of a swank squat for as long as the music is still playing on this merry-go-round.

Their new neighbors are wailing and whining that Kawamoto’s notion of renting to the homeless is going to lower their property values.

At best one would have to believe that Kawamoto is coming to philanthropy late in life. He seems to have made his fortune in the go-go Tokyo real estate market, where he owned 50 bars and nightclubs at one point and then was involved in wild speculation in Hawaii in the 80’s run up there. At one point he was reportedly driving a “Kawamotomobile” through the islands and buying property in cash on the spot. His history has never indicated that he would lose a single wink at how often he evicted tenants, though to his credit (discredit?) he is responsible for California passing a law giving tenants 60 day notice since he was famous in that state for throwing people on the street after a month!

Somehow I am afraid that reality may end up different than TV. 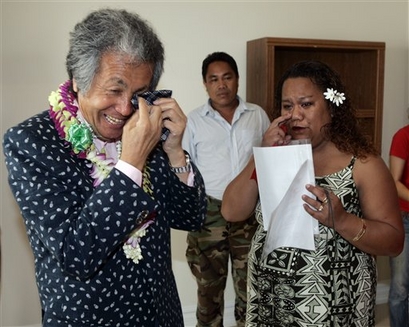 Japanese billionaire Genshiro Kawamoto, left, and Dorie-Ann Kahale, both cry after Kawamoto handed over keys the to a multimillion-dollar home in the exclusive Kahala neighborhood for Kahale and her family to live rent free, Thursday, March 22, 2006 in Honolulu.
The Worley family stand outside the home of Japanese billionaire Genshiro Kawamoto after Kawamoto handed over the keys to the multimillion-dollar home for the Worleys to live in rent free. 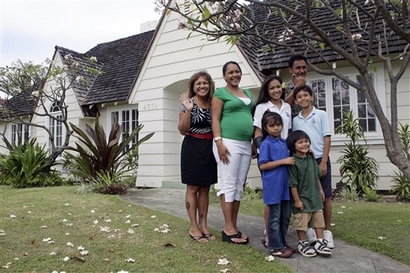