Baltimore The rain was finally gone from the New York City dawn as my cab pulled out for a more blustery Baltimore in the rawness of an eastern spring. I couldn’t help smiling to myself thinking about the couple of “serious” points that President Clinton wanted to share with the crowd and then pushed me on later as well. There were really two of them.

One has been part of a discussion and partnership with the President and his foundation for the last period of time and that has to do with both increasing the participation in the Earned Income Tax Credit program for lower-income families and pushing to curtail the impact of RALS — refund anticipation loans. The Clinton Foundation had given its first ever grant to ACORN to expand our ACORN Tax and Benefit Centers more aggressively within the “Katrina footprint” with mobile units and laptops to ensure that the filing got done. Clinton had come to the party a little late on RALs but he now had the religion and was increasingly ready to be a powerful ally in joining us to push the companies from one side, while we pushed from the other side. Something might come of that.

The President was lobbying in a very direct way, even calling out Chairman Charlie Rangel on the point that there needed to a consolidation of the filing process for EITC and child care credits. He pointed out that he was making big money now, and he automatically got his big Bush tax breaks, but would be glad to forgo the tax breaks to have the same automatic consolidation done on the same form at the same time for low income taxpayers as well. Good point.

The other issue Clinton buttonholed me on after his speech — and while he was giving his speech — was proposing a partnership with ACORN and the Foundation to do something about global warming and more specifically to combine cutting down CO2 emissions and lowering utility bills for working families by putting dirt on rooftops, laying down sod, and thereby creating both insulation (dropping the bills) and green emissions. At one level it was the same ol’ Bill that I have known for more than 37 years: if there is going to be a big, new thing — like global warming — he is going to want to put his fingerprints on it. On the other level it made sense if there was a practical way to do it.

Later I asked Ismene Spiliotis, our crack housing development director in New York and the East Coast, was this really possible? She said she was sitting on the other side of the room with some of the big developers and they were all cracking jokes after the speech about how quickly all of the roofs in Brooklyn would cave in. Most just were not built structurally sound enough to hold the weight of much of anything, much less topsoil. But in saying that, Ismene was equally clear that something could be done and that there were very likely other ways to do it.

Having worked with Ismene for years and having worked with President Clinton over the years, I could see it coming. What she was saying and what he would find out soon enough, was that it might cost some money, it might take a world of work, but it was possible, and therefore it was time to start rolling up the sleeves and figuring out how to get it done.

I finally called over Clinton’s shoulder to his domestic policy aide, Trooper Sanders, and said, “Trooper, get your man out working the crowd for me — he’s trying to rewrite ACORN’s 07 work plan, and we’re too busy to change it right now!” We all laughed, and Clinton grinned and watched the crowd form around him for pictures and handshakes, and I sneaked out of the room thinking I was going to have to see what we could fit on this new work plan in a deepening partnership. 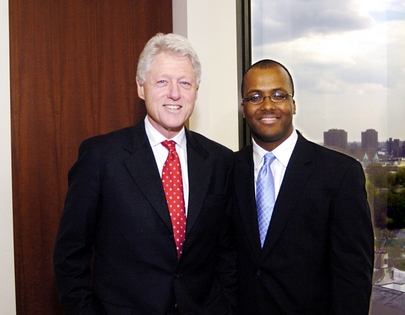