Bangalore Despite the different ways that I received this city, the whole situation is deceptive it seems. With more than 6 million people in the metropolitan area, Bangalore has become the 5th largest metro area of India and by some reports is now the 3rd largest city, though it is hard for me to believe that this smallish seeming city is larger than Kolkata. Leaving town we finally saw a gleaming new building with Cisco Systems in large letters on the front and the teeming street life of India on a Saturday evening all around it — an alien object that had somehow landed here it seemed — so this must be the high tech capital of India after all.

The workshop organized by the ACORN FDI India Watch Campaign was an impressive affair and strongly attended by close to 100 people. I have now been to several such meetings and can testify that politics and organizing is taken seriously here. The meeting went just over 6 hours filled with hearty speeches, panel discussions, an open mike session, singing, lunch, and tea at the end. The local language here in the state of Karnataka is Kannada. There was little translation so for me it was an interesting and vital experience. I often found myself thinking of the immigrant reality of being surrounded by a strange and incomprehensible world of sound without language, letters that stood for unknown words and the signs and sighs everywhere that became signals for understanding. I was of course luckier. Occasionally, a note would be passed to let me know what was happening or an English speaker would whisper some points to me so that I could follow the debate. And, I knew what was happening because I understood the issue and subject of the struggle, much of which centered around agriculture and the APMC — the Agricultural Production and Management Commission.

Way before software, this area has been — and continues to be dominated — by agriculture. The issue around multinational encroachment in south India is the effort of Reliance and now likely Wal-Mart to control agricultural production through contract farming and the push to move it directly to the marketplace and cut out the APMC, which has been the state broker for agricultural products. Many states have already amended the laws that make the APMC dominant, and of course also allowed the traders, a critical part of our campaign base, to be the middle men bringing the food the final steps to market from the APMC. In Karnataka the issue was moving to the state parliament on whether or not to amend the APMC and thereby let the MNC have the way. Speaker after speaker, whether trader or union or whomever, railed against this beginning from the opening remarks made with vigor by the more than 80 year old freedom fighter, H.S. Dotoi. It was an honor to think of the continuing of more than 50 years of struggle on these issues going back to the time when Indians were struggling for their own independence from Britain.

A solid “joint action committee” was built which has been the local coordinating structure build under the ACORN India FDI Watch Campaign structure, and as we left the meeting in the bustle of the traffic, it seemed another front was solidly opening up in the south around these issues. 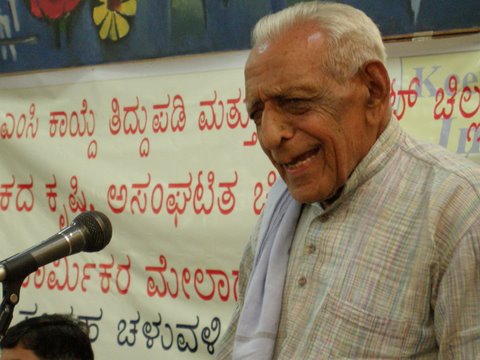 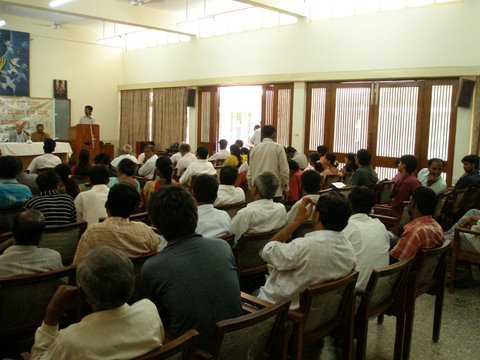 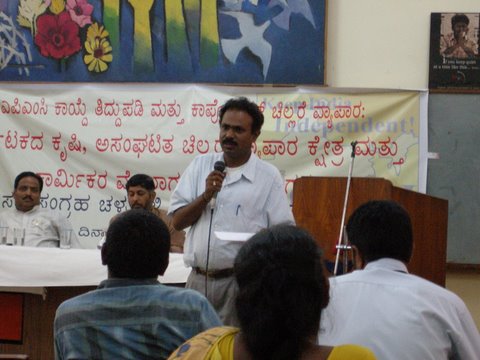