New York In Chicago the other day everyone was over the moon about the huge numbers of people (over 150,000) that hit the streets in the city to send the message into the spring air that it was way past time to address and resolve the immigration issue. Why were the numbers so large there? Because they need to be, I imagine.

They hoped that there were equally large numbers in Los Angeles. Perhaps there were. There was a smattering of crowds reported in other cities. Perhaps this is the way we will have to celebrate May Day in America.

The news was subdued. Partially because these marches were no longer phenomena, and they were not as widespread that they unsettled. We were losing our edge before we were winning our victories.

Herbert Marcuse called this the “flesh-eating machine:” the way in which the constant boredom of media in the public space so quickly takes away the critical content of events.

This is unfinished business though, so whether hidden or splashed across the front pages, something has to be done. 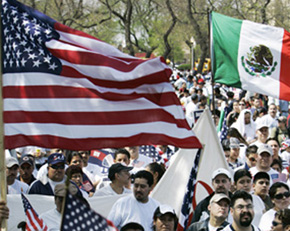 People gather for a rally at Union Park in Chicago before the start of an immigration rights march Tuesday.