Amsterdam to Utrecht to Koeln to Stuttgart     They haven’t made a decision yet, but they are thinking of banning me from Eurail. Perhaps I should keep quiet, but there are issues and incidents that should be shared. If you think riding the trains is as easy as hopping on, getting in your seat, and leaving the driving to them, then think again, comrades.

Right now I’m sitting in the Utrecht Central station. It is fairly new and fairly modern (hold that….a guy with his 2 children just sat next to me and read that note over my shoulder…he wanted you to know that in fact he has lived here for 24 years, having stayed after coming here as a student, and the station is actually 10 years old and is the subject of huge plans to rebuild an integrated mall and station system over the coming 10 years as part of a private-public partnership to modernize this entire section of Utrecht and accommodate the building of 30,000 houses on the other side of the tracks and eliminate crime between the station and the “old” city — they are even reopening up canals that had been covered — he wanted you to know all of that and now you do!). Not a Berlin Haupthahnhof you understand, but at least not a low-grade number like Amsterdam Centraal, if you know what I mean, and I am sincerely hoping that you have NO idea what I mean. But, let’s say it this way — there are seats in Utrecht. In Amsterdam, not so much! Ok? Get it? Let’s go on.

I might have been on a train in a brand new, first class reserved seat in coach #28, seat #35 on the aisle. That’s what my reservation showed and that’s where I was sitting just minutes ago. For some reason when we stood in front of the train, they didn’t let us on. The other people in line with me, understanding more than one language, wandered down a couple of cars to see what was happening. No sense in me doing that, so I waited a little, noticed the train was supposed to leave in 5 minutes, so I pushed the button to open the train car doors, and helped myself in, found my seat, sorted out and stowed my bags, and looked around approvingly at the layout that had only run an extra $11 USD from what the reservation seemed to say. One train maintenance guy came by speaking Dutch to my English, but enough English when I told him I was on the way to Koeln (which you may or may not know as Cologne?), he said OK, all good. I sat back down. But, still no one else came into the car with me. Could they have separated by cars somehow? I walked down a couple of cars. Saw no one. At each door I tried to open them from the inside to see what was happening. No luck. The train was supposed to leave at 12:05 PM. It was 12:06 PM. Ok, let’s go American on them. I started pushing buttons. I tried to read the German instructions about the red button in front of me. No sprechen zie Duestsch. I pushed the red button. Whoops! A little piece of glass or plastic broke under my finger and an alarm started ringing. I had done it again! (You see on my first train on Memorial Day after having flown all night, I tried to open the water closet door and hit a red switch too hard and literally STOPPED the entire train. I was warned about a 100 Euro fine if I did this again, but in Dutch the attendant informed the engineer that it was a tourist messing up again or words to that effect, since I only understood the word “tourist” and my profuse apology!).

Finally, a railway steward came up to see what was going on and said that the train had been cancelled and I had best be double-stepping it off! I was finally informed later that there was a security problem up ahead of some undefined nature, and perhaps the next train would not be cancelled in 2 hours and if it were then in 4 hours I would be set. Of course by then it would be fight for the seats since three groups of passengers would be fighting for the same seats, and of course my connection in Koeln would also be missed so lord knows when I would end up in Stuttgart. The irony of course is that it turned out the train was deadheading on the track, so the maintenance guy was probably right. If I had stayed on, I would have traveled alone to Koeln. That would have been sweet!

So, maybe the trains are not as “all that” as I had thought? Talking earlier in the week to a program officer for the X-Y Solidarity Fund, I had commented on how good the train system seemed to be. She scoffed. It turned out that her brother worked for the trains and in fact worked at Amsterdam Centraal. They are often late or cancelled she had told me. They are not maintaining the track. It all came down to the problems of privatization of some functions of the railway system. I had listened closely, but having been on Amtrak, I had not wanted to tell her how rough it could get, but I am rethinking her comments now.

Here’s another interesting point about this situation of mall/train stations along the Berlin model, and it sounds like the emerging Utrecht plan (my seatmate in the station also told me that Utrecht is the railway crossroads for all the trains, which is why this station is so much better than Amsterdam). In Germany there are what we call “blue” laws in the United States, meaning times at night and on the weekends where certain stores are not open and certain items can not be purchased. Perhaps that is also the situation here in the Netherlands, if my friend was still here, he would know, but the point is that there is an exception in Germany for train stations where anything goes and they can be open 24/7, so let the good times roll, and here come the mall rats!

There is one nice thing about train-like things though that I will share before being banned from everything on a track. This morning on tram #17 making my way from the far west to the central station, an elderly Dutch woman slowly boarded the tram and held on tightly to the rail in front of the fare attendant. I was 6 long feet away, and motioned to her to try to make it to the empty seat next to me. She held on until the next stop, wavering all of the way, then slowly took the 3 or 4 steps to collapse next to me. She then turned on me with a big smile and said something in Dutch. I made the sign of waves with my hand as if I understood. The fare attendant was watching the exchange. Five or six stops later my elderly companion got up slowly to exit and switch trams to another line. Her back was to me as I watched her closely (as did the seated attendant) to see if she was going to make it safely off the tram before it lurched forward and threw her to concrete or fate. She made if off and turned to me and waved with a big smile. I waved back. She waved again through the window to me as the tram rolled away. I finally put my hand down and looked ahead. The tram attendant was looking right at me with a huge grin. I shrugged and held up both of my hands. She smiled, shook her head, and laughed.

When I got off at the central station, she wished me well in Dutch.

I may not be doing so well with the rolling stock, but luckily people are people, and they are making the trip livable in a special way. 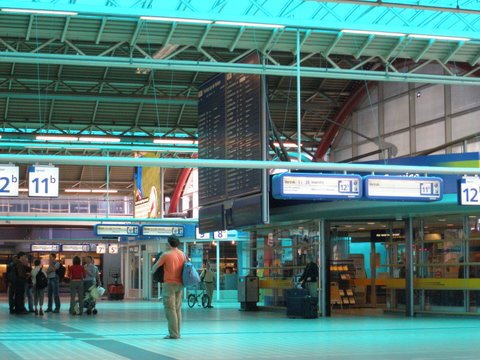 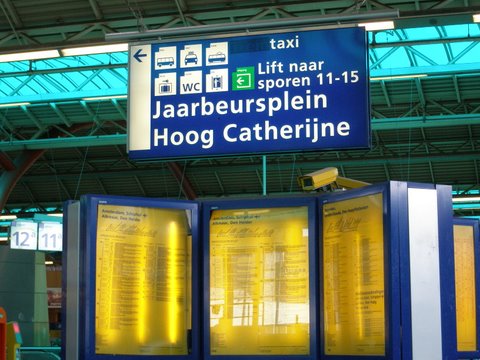 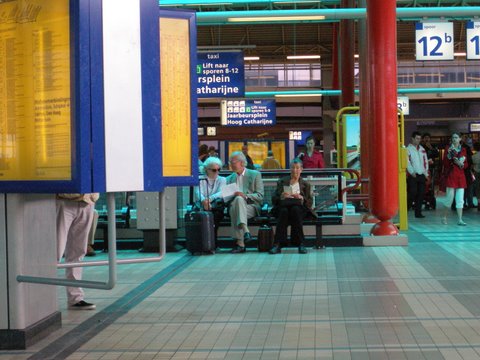