Amsterdam I want to stress that I have learned more about Europe and the European sensibility than just how the trains work (and might work better without me!). Not everyone (I hope!) will have to take a crazy criss-cross trip across some of these small countries, but I would like to share a couple of things I have learned with my devoted readers who might not have done this or might want to be prepared (or think twice!) before embarking on a similar journey.

* They smoke on trains in Germany! This is no lie. There is a smoking section, nasty as it can be up in 1st class, but of course that means that it quaffs back into the whole 1st class car so that people are hacking and coughing, but pretending there’s no problem.

* The Germans do not seem to notice on the Deutsch Bahn (DB) (German Train) because they also smoke like wild maniacs all over the stations and on the tracks while waiting to crawl onto the trains. They congregate in little smoking areas where they stand together generating small clouds and community.

* Yes, the Dutch are huge bicycle people. They have the most wonderful bike paths and lanes just about everywhere. These are also pedestrian kill zones particularly in urban areas like Amsterdam where a 2-footer can either walk in the street sometimes or be 2-wheeled over. The bikes have little, tiny bells which are virtually no warning at all. Regardless, it’s a good thing. Seems healthy on the whole for the bikers at least. Do not though for an instant believe that this is some environmental craze. Oh, no! Gas costs something north of $10 USD per gallon from what I could tell. Parking for a car is totally out of control — one person told me she paid $60,000 Euros, which must have been an English error for $6000 Euros, but she SAID $60,000, you hear me! Taxi’s start at 4.60 euros when they key the ignition to start. The cars are small, small, even though some of the people are immense, and the traffic is serious, too. Regardless, the bikes are all about the fact that people can not afford to drive and the public transportation is not the cheapest buy on the planet either.

* I ran into a family from Albuquerque (on the train between Dusseldorf and Utrecht). They had trained across Italy, Monaco (like that!), France, Germany, and were on there way to Netherlands, and then to Ingleterra. They thought Germany was super clean! Let me tell you — Germany is a cesspool next to the Netherlands. They are super clean up here except where they have scads of tourists, but that’s us not them after all.

* On the other hand a union organizer with the large Dutch union, FVN, said you could forget about workers striking grocery stores in the summer for virtually any reason, because they couldn’t keep up a line without their beer and barbeque in the nice months.

* The Dutch eat French fries with huge piles of mayonnaise. They look at you funny and ask a second time if you say that you don’t want mayonnaise on your fires. What is that about?

* Amsterdam also has the world’s smallest hotel rooms. A picture of mine on my last night in the Netherlands is included — maybe 10 by 5 or 6 feet. This is understandable because everyone in The Netherlands told me that no one could afford to actually live anywhere near the Centrum. Strictly for tourists. People lived a long way out along the outer canals with the ducks and water.

* Our money isn’t worth spit over there (and don’t get me started on England and the pound!). Don’t bring twenty, bring plenty, and it’s still not likely enough.

* In Berlin the street numbers make absolutely no sense, which makes you rethink the whole question of German engineering, frankly. On the same block, numbers can go “up” in sequence on one side of the block, and “down” in sequence on the other side of the block. [In fact the seats numbered on trains are not in sequence either, but you must be sick of hearing about trains, I know I am!]

* Give the Germans credit though for some things. Despite the fact that there is wide scale economic dislocation and unemployment rates near 15% in large parts of the country, you do not see any measurable level of homelessness or panhandling. I have been approached only once (Dusseldorf) for 70 cents on the track, but otherwise have seen no one no where. Doing something right for people in Germany!

* TV is bad in these countries.

* It is certainly true that we are illiterate in the United States. People in Germany take two other languages in addition to German of course. It has gotten more liberal they told me: now you have a choice about whether to start with English or take it 2nd. I listened to a charming, but biased conversation between an older woman living in Bonn who spoke Dutch, French, English, and German (and was studying Russian), and a younger woman raised in Belgium who of course knew French as her native language, English perfectly, and Dutch. Basically, the way to travel is to simply throw yourself on the mercy of people — they love taking care of Americans.

But that’s another story. 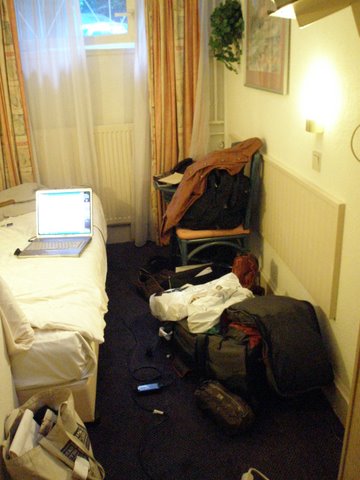