New Orleans        I have to admit to deeply mixed feelings upon reading the news that Cindy Sheehan, the bereaved mother of an American soldier lost in Iraq, was throwing in the towel as a spokesperson and leader of the anti-war efforts.  I don’t believe these are fights that any of us can quit on the one hand, and I believe on the other hand that she probably needed to move off the stage in favor of other voices.

Sheehan had her Warholian 15-minutes of fame in August 2005 when she camped outside the Bush ranch in Crawford, Texas in hopes of appealing to the President, on behalf of her son and others, to end the misadventure in the Middle East.  Bush wouldn’t meet with her, proving once again a universal law of organizing, that power fundamentally controls the response to tactics, and never did.  She had a story, and for a minute she held the stage as a moral voice of conscience that so needed and rare in modern America, and her request to speak fit in perfectly with a long-held value fought for by many citizens that maintains we have the freedom of speech and the right to speak truth to power.

But, as her voice was ignored, she seemed to be thrust into situations where she was less equipped and experienced.  Her handlers, desperate for a spokesperson and more importantly, a symbol, flew her to venues around the world where her voice became strident and stale as she mouthed slogans that diluted the distinctness of her original story.  The transition from bereaved mother and what that meant to anti-war spokesperson arrested here and there, banging on this door or that, clutching a microphone or railing at the press, put her in situations that seemed strained and sad.   I found myself shaking my head more often than not over the last year because Sheehan seemed so out of her element and over her head.  Her personal grief seemed to have metasized her judgment, and whether this was true or not, she seemed to be a victim now of movement manipulation, rather than a clear voice.  So, when I read that she had “resigned as the face of the anti-war movement,” I was frankly relieved.  She would be spared the embarrassment, and the movement needed to find other voices that could be heard.   She needed to move on and find herself again, and so did we.

I say this despite my belief that there really is no such thing as “resigning” from a movement.  I remember an article in my hometown paper, the New Orleans Times-Picayune, written some 10 years ago about Rev. Avery Alexander in the twilight of his life and career.  Rev. Alexander had been a local civil rights leader, Baptist minister, and more than 20 year veteran of the state legislature, where he had been one of the first African-Americans elected to that body.  Others thought he should step down and let new and younger voices move forward.  At every legislative session there were discussions about whether or not some kind of retirement package could be crafted, as Rev. Alexander moved from his early to mid to later 80’s.  It never happened.  He kept preaching.  He kept showing up to speak whenever invited, including by ACORN, Local 100 SEIU, and HOTROC, when we were organizing hotel workers.  He died with his boots on.

Anyway, the article mentioned that Rev. Alexander was “from a tradition” where you didn’t quit.  The author of the article (whom I don’t remember now) wasn’t sure if the tradition was unique to Baptist ministers or freedom fighters for social justice.  He just knew, rightly, that Rev. Alexander was part of it.  I frankly don’t know enough about Baptist ministers, but I do know that freedom fighters can’t quit until freedom is won, and that fight never seems to be over.

The fact that Sheehan was out of place and probably did the right thing by stepping off the stage seems confirmed by her final statement.  She said, “I will never give up trying to help people in the world who are harmed by the empire of the good old US of A, but I am finished working in, or outside of this system.  This system forcefully resists being helped and eats up the people who try to help it.  I am getting out before it totally consumes me or any more people that I love and the rest of my resources.”

A curious statement perhaps, but it speaks to the conflicting feelings that she must have had.   How could she have been prepared for what Herbert Marcuse famously called the “flesh-eating machine” of media and the vicious tug of war of the public forum?  She gave enough.  Why have we not found other leaders and spokespeople:  other parents, other veterans, other children, other citizens?  If this is a mass movement, where are the masses?  Sheehan’s painful resignation forces that question, and we can only hope there are quick and strong answers.

The fight for social justice is also a fight, and no quarter is asked or given.  To think otherwise is simply naive.  But that doesn’t mean that there are not casualties.  Let’s hope Sister Sheehan got out before she became one herself.

Good luck and good wishes, Cindy Sheehan, in your return to civilian life. 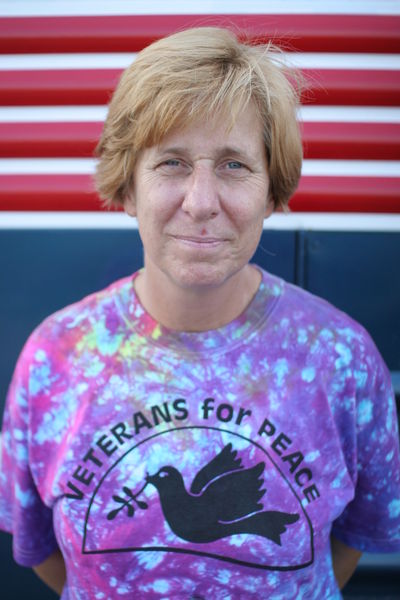