San Francisco     Not long ago there was a disconcerting article in the New York Times about internal upheaval in the Save Darfur Coalition in the wake of its pivotal role in beginning to finally create an international will to stop the killing in this part of the world that has led to more than 200,000 deaths. The Times noted that many believe that this effort of strategic and tactical will may be the most successful in Africa since the pressure around companies supporting apartheid in South Africa.

Nonetheless the Coalition, which had been the most visible and primary advocate here, had sacked its executive director who had spearheaded the campaign and was seemingly in the midst of board reorganization, mission re-evaluation, and general chaos from these reports. Rather than ending the excitement of achieving an important victory, there was a meltdown. The inside spinners attributed the problems to the rush of money coming into the campaign, the media strategy which importantly contributed to the success, but was controversial on the ground, and the aggressiveness of the campaign. Much of this many of us would have applauded. The rub seems to have been the fact that aid workers with other organizations administering relief in Sudan felt caught in crossfire, almost literally, because the government was threatening to slap back at them in retaliation of the Save Darfur Coalition’s work and advocacy. Admittedly, that’s a difficult and classic problem: how to protect the ground forces when you are delivering heat at great distance. Likely there are merits to all positions and many lessons to learn.

What really caught my eye though was an odd paragraph where the reporter remarked that it was impossible to get many real facts on the dispute because of the usual culture of non-profits not to speak about any business involving them and other non-profits. Wow! Just a simply statement of “common knowledge” that non-profits are not transparent and essentially that we have a culture of “covering” for each other. I found that fascinating; I had no idea that this was the accepted world view of our work and practice.

Part of it I’m sure has to do with not exposing disagreements that would confuse donors both big and small, since that is the lifeblood of most of these groups. Part of it probably also has to do with the “baseless” nature of most of these NGO’s on both sides of the dispute. Neither really has to answer to anything other than a board in all likelihood so the immediacy of winning and losing may be less the issue that the delicate balance between all of the principal players, most of whom in one configuration or another will be joined at the hip on some other campaign some day soon.

But I wonder if this “advances the field” as my colleagues at the Tides Network sometimes say. Outside of things like the Organizers’ Forum, how do any of us assist each other in clarifying and giving direction to dialogues about lessons learned, mistakes made, and even the problems that come with success? I would hate to be an advocate for public disputes and disagreements, because that can not be the way to move forward, but without good alternatives, the steam will continue to buildup until a valve explodes, or something like this Save the Darfur meltdown ends up as a half page article in the New York Times. 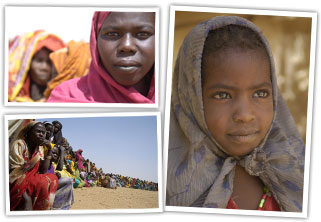 Save Darfur is a coalition of organizations formed in response to the humanitarian crisis in the Darfur region of Sudan.