New Orleans An obvious disclosure is that we deeply care about poverty. We care about whether money is overtaking politics, too. We in fact believe that the poor would have a better shot at participation and policy if the role of money was lessened. So I’m admitting all of that, but nonetheless I am mystified why with so little attention is being given to anything about the poor, that the New York Times would run essentially an attack piece on former Senator John Edwards on the front page of the paper the other day solely because they wanted to cast aspersions and editorialize in the piece about whether his fundraising about poverty was over the legal line.

Most of their attack is based on the following quote from a private Washington lawyer named Marcus Owens, who once upon a time headed the IRS division supervising non-profits, which I suppose means tax exempt organizations, though the Times doesn’t clarify and may not know the difference. Look at the quote: “I can’t say that what Mr. Edwards did was wrong. But he was working right up to the line. Who knows whether he steeped or stumbled over it. But he was close enough that if a wind was blowing hard, he’d fall over it.” Basically, we have a lawyer supposedly in the know, saying “no problema” and then offering a series of colorfully expressed speculations about stumbling and the wind that simply say that he could have done wrong, I guess if he had tried. Unfortunately, when it comes to the IRS and its rules that pretty much goes for all 300,000,000 people in the USA!

The beef they have is that Edwards’ poverty center did not disclose donors, and much of the money was spent allowing Edwards to be an advocate for the poor and to work personally to alleviate poverty. Let me try to follow this. A former US Senator runs for VP and narrowly loses. He then decides that rather than just hang out with the rich and famous and give it another shot, that he is going to travel, speak, and agitate about poverty. I need a lot of help figuring out what is wrong with that?

Furthermore, we were on the receiving end of Edwards’ advocacy because he joined with us in a half-dozen states in working to raise the minimum wage. He was tireless. Furthermore, there was never even a hint of quid pro quo or wink and nod. There was no behind the scenes, “hey, ACORN, I’ll stand tall now, but you need to commit you are with me in ’08.”

I’m not saying Edwards is not running for President, he absolutely is, but I am saying that he is totally committed to fighting against poverty, and his voice counts. It is beyond me why that would not be a fair — and legal — expenditure of funds, which the Times concedes. And, that makes this a cheap shot! 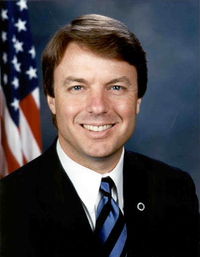