Washington It would seem like the simplest of standards for a lender, when giving a loan to someone for anything, to make sure that the loan is affordable to the borrower. If a loan wasn’t really affordable to the borrower, then no institution would ever loan them the money because the risk would be too high and the chance of foreclosure would loom around the corner like a wolf at the door.

Yet we all know, particularly those of us who have dealt with the subprimes intimately, which is to say that we sat across the table from them repeatedly and would ask, “can’t we agree that affordability” should be part of any standard best practices? New Century, Option One, and a dozen others would then say, “sure” and go on to talk hooey about some fancy computer program that was going to make sure that all of this was going to work.

The whole house of cards was built on the assumption that before the subprime borrower was shuffled from the “teaser” rate, which was obviously lower, way lower, than the higher adjustable rate mortgage (the famous ARM’s you have read about that are so well known from the expression, “I’m going to put the ARM on you,” i.e. apply force in collection!) at a much higher (and frequently unaffordable) rate of interest that the borrower would refinance, often because the same company was selling the refi product through its brokers and often because both were collecting a pre-payment penalty in this sleight of hand (not a scam because people were hurt badly, so much more like theft in an area of lawlessness).

Now the federal regulators have followed their earlier advisory with a statement at the end of June that the “affordability” standard will rule. The requirement shall be that the borrower, when receiving the loan, must establish to everyone’s satisfaction that they will be able to float the note when the teaser rate expires and the iron weight of the ARM hits them up the head and hard. The lenders will be required to collect more information to prove this, and it matters since 75% of subprime loans recently (like last year!) had teaser entry rates. Secondly, and very importantly, borrowers will have a 60-day period to refinance and escape the ARM escalation without a penalty, thereby escaping the pre-payment penalty ripoff as well.

Without a doubt the regulators looked at the precipice and ran, rather than really looking over at the fall and building a bridge for lower income and riskier borrowers. Most of this seems designed to push the lenders away from their worst greed, rather than really protecting the borrowers. Rather than getting front-end protection from the silver tongued devils, the borrower is getting an escape clause which might put them at the peril of the market and other lenders as well.

Kurt Pfotenhauer of the Mortgage Bankers Association (MBA), who an ACORN delegation met with once again less than two weeks ago told the Wall Street Journal, “All regulatory actions come at a cost. The people being stuck with the bill for this one are those who have been making successful use [of novel mortgage arrangements] and have paid their bills on time.” Huh? What could Kurt have possibly being trying to say as he applied lipstick to this pig? The “cost” presumably would mean the additional recordkeeping to satisfy standards of affordability, but that’s a wash and perhaps a favor to the industry, since it will likely be offset by fewer foreclosures and they have been collecting most of this information already, but in too many cases either ignoring it, passing the problem to the next outfit down the line, or in the case of the unmanaged and unregulated brokers, simply taking the money and running. Unfortunately it appears the real “cost” he is referring to is simply the lost cash the companies (many of them reeling now) were booking as ill gotten gains. But, wait, is that it? He then talks about the “people being stuck with the bill” — maybe he is referring to that as the cost? But, then he says that these “people” are cool. They have “drunk the kool-aid,” as the former CEO of New Century called this product when talking about his own situation to several of us last year, and “paid their bills on time.” If so, how are they “stuck” with anything here. These folks can merrily watch the rates move from teaser to truth and happily lose their shirts on this hustle. I guess that is Kurt’s point here. Who knows?

Half of the subprimes in 2006 were made by institutions not even federally regulated, so they have to still act on all of this, so Kurt is probably just spinning gobbledy-gook and hoping no one notices. Good luck with that!

Low and moderate income borrowers are not trying to buy houses that they can not afford simply to “pretend” they own a house and end up paying very expensive rent in closing and a million other costs. They want to believe that when a banker or broker across the table from them shakes their hand that they have achieved a dream and that a trusted professional is convinced that they can make it. Anything else is simply cynical and greedy. Might as well tell it like it is. 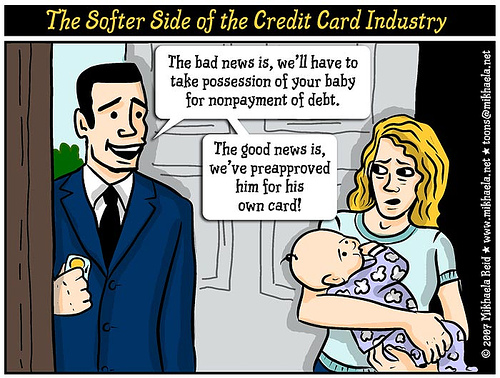 The softer side of the credit card industry…it also applies to subprime lenders.