New Orleans Councilman James Carter in my own home district was having a public hearing on a big development proposed in the next block from where I live. Someone had bought the old Frey’s hotdog plant and had in mind to build more than 100 units of wildly expensive condos on the space ranging in price from $250,000 to almost $400,000 in the Bywater, which the New York Times had famously — and accurately — called a “working class” neighborhood right after the storm.

I didn’t know the developer except coincidentally. Sometime before Katrina she had yelled from the roof of the plant at Sandia (my old German shepherd) and me as we went by one day for some bizarre reason. But, the fact that she is not much of a neighbor didn’t mean that she might not be a better developer. Nonetheless, she didn’t know me from Adam, not really, but in the way these things go, I hurriedly pulled my stuff together to run out of the office at 6:00 PM to catch the hearing, because out of nowhere she had sent me (with copies to some of the other national poo-bahs of ACORN) a couple of emails out of the blue, which is the way of the internet with its lack of both boundaries and manners, I suppose. The drift of her emails seemed to be that she wanted to personally attack one of the ACORN organizers and try to divide the organizing staff working in the Bywater around this issue from each other and I guess try to see if the national organization would somehow intercede in her behalf and because of her say-so in an issue being engaged by local members in New Orleans. I had tried to politely respond by simply saying that I was sure she was an experienced developer and she must not be surprised to find that other people living in a neighborhood might have different visions of a project’s impact than hers and might have different dreams for the area than she had. Furthermore, a membership organization like ACORN was certain to follow its membership, and the membership wanted changes in her project. I would have thought this was as polite as she could hope to hear from me, but instead within a short time she bounced almost the same question again to me, and it was best to not respond, but in fact to go down and listen in for myself.

The hearing was a mess. Carter tried to ride the tide as best he could. The developer had stacked the crowd heavily. When hands were raised it seemed there were probably 2 supporters for the project to every 1 opponent. The local ACORN group was certainly outgunned, but that happens and might not be so bad normally. The group was not really against development but wanted an accommodation to their interests, rather than swallowing whole the developer’s huge out-sized multiplex. This is just the way of these things.

What was surprising was the venom of the proceedings and the proponents! There was no feeling of community or of neighbors trying to figure out a way to live and let live with other neighbors, even when they might disagree. There was a lot of talk about property values along with several testimonies from well-known real estate agents in the neighborhood. A woman who said she lived uptown but had bought a house nearby stood up and read statistics about density? Only the people living in the immediate vicinity of the project opposed it. Although some people said that they had lived for 10 or 20 years in the area, many of them talked like “main-chancers” — folks who were hoping they could sell and scram. A controversial talk radio woman stood up and gave a screed that basically seemed to link one racially coded comment after another in talking about crime, St. Claude Avenue, and denigrating the neighborhood grocery stores (she has such a store directly across from her house, that I can only imagine must s
tick deeply in her craw) including calling an young African-American man who opposed the project (and lived 2 blocks from the site) “baby-boy.” The final comment of the evening was in the same vein as a guy read a string of invectives and essentially red-baited ACORN as radical extremists and the ilk. I’m not sure what Councilman Carter learned, but for my part I found the whole affair sobering and disturbing.

What are the real merits and demerits of the project? It’s too big a footprint for a residential neighborhood of course, especially one in an older, historic neighborhood. Because of the opposition they have supposedly set it back off the street more (previously they were simply constructing a canyon in the neighborhood), but even slimming it down some, it is still 210,000 square feet essentially in a couple of big-boxes that they want to build 5 stories high. I was struck by the size because we have a lot of experience dealing with Wal-Mart and similar big-box operations which carry about the same footprint, so we are familiar with the added questions about traffic patterns, crime, and infrastructure pressure such projects cause. In this polarized setting, little of that came to the surface. In Orlando the county commissioners took a special look there at how close such developments should be to public schools and public facilities, and as it happens this proposed project will be essentially next door
to a public library and across the street from Fredrick Douglass High School. They probably should reduce the height to 3 stories or 4 at the most so the project doesn’t become a huge fat obelisk in the Bywater. I’m sure the developers don’t want that because it lessens the take, but knowing what they spent for the property, they would still make out like bandits and the neighborhood would be the better for it. They did a lot of talking about amenities and putting in a grocery store, but none of that is likely to happen realistically, and even if it does most of this won’t last long: I would love to be in town for a couple of days to watch these folks deal with a grocery store when all of the kids come in from Douglass next to these $300,000+ condos!

Density is a good thing in an urban neighborhood, but so is scale, and once the name calling is over, Councilman Carter is going to have to make sure this works for everyone, not just the developers, their friends, and retainers. 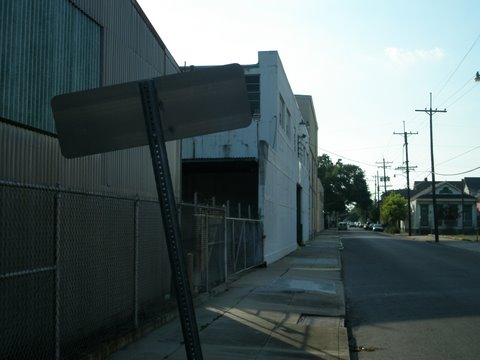