New Orleans Before leaving Philadelphia I had a meeting with the executive director of a training program at the University of Pennsylvania, and she had scheduled the session for lunch at the White Dog Cafe. I had often heard of this outfit as we tried to organize small business people to protect community enterprises, but I had never actually been there, so I was delighted to see the operation on the ground. I asked Mildred Edmond, our former national president and a lifetime native of Philadelphia for directions to the White Dog from Temple where our annual ACORN leadership school was being held. Mildred looked at me blankly and said she had never heard of the place. Whoops, as Mayor-almost-elect Nutter said earlier, perhaps there really are “two cities in the same city.”

I found the place finally squeezed into a block of remaining row houses between Drexel University and University of Pennsylvania. No parking anywhere! I found a slot several blocks up which turned out to be valet parking for some invisible hotel. Walk-in traffic must be the order of the day.

The White Dog turned out to be one of several restaurants, bars, and shops lining the street. The actual restaurant was cobbled together from three different houses over the last more than 20 years. Reading the history later, it seems that Judy Wicks, the founder and owner of the cafe, had been living in the house and started selling coffee and muffins out of the front room, then later sandwiches cooked on a grill in the yard, and gradually more and more.

Wicks is probably better known than the White Dog, because she has been an evangelist for the importance and progressive possibility of small business people. The Wal-Mart Alliance for Reform Now (WARN) has reached out to some of their affiliated groups in different cities to incorporate their point of view in the community debates around the impact of Wal-Mart and other big box operators on communities. The Dog pays workers a “minimum wage” of $9.00 per hour after probation and dedicates a healthy percentage of its profits to cause based operations. There is no question that this is an outfit committed to social causes and programs. My hamburger was no cheap item from Wendy’s and of course it was all organic and locally grown everywhere to boot.

It turned out that part of the fight here years ago was in maintaining these row houses in this location at all. Wicks had also founded a “peoples’ thrift store” of sorts with her husband at the time, which later he took to huge profile and profits as the well known hipster store, Urban Outfitters.

It was all pretty impressive, though certainly a long way from its roots as it occupied a niche squeezed between town and gown, hipsters and politicos, as a “destination” restaurant with its own brand. Perhaps not a sustainable model for other cities, but a wonderful addition to Philly nonetheless and a beacon shining light in the midst of so much babbitry. 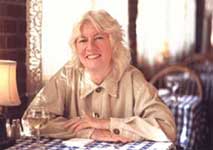