Philadelphia Senator John Edwards had the last shot at the 1000 ACORN members that had been driving all morning in many cases, fed a box lunch, and then put through the paces on one meeting after another for more than 4 1/2 hours. He was a friend, and he knew it. He had been in our trenches, and he had ACORN’s respect. But could he get the attention?

First, he made the point that he was willing to stand with us in essence, no matter what anyone else thought about ACORN. There was applause and appreciation, but frankly, I could tell that in fact, the members expected that from a friend. If he was a friend, he would of course have stood with us, and vice versa, we would have stood with him as well.

But, then he hit home, calling for an increase in the federal minimum wage to $9.50 per hour, and he had clearly chosen ACORN as the place where he wanted to make that announcement! The most recent increase passed by Congress, and not even enacted yet, will push the total from $5.15 to $7.25 over two years. Edwards upped the ante another $2.25 or almost 1/3rd. Such an increase would finally restore much of the lost buying power of the federal minimum wage, and with indexing (which of course was part of his agreement as well), it would really mean something.

Talking to the members in the parking lot right after his speech, I asked a number of them what they thought of Edwards. Over and over, one after another, said in words or by moving their hand over their hearts, that Edwards really meant it about ending poverty. This was real for him, just like it is for us, and not a simple campaign theme or a way to curry favor for votes. It’s his mission too.

No one was closer on the issues to ACORN right down the line, question after question, but could he still get to the top of the ballot as the money boys continued to throw their dollars heavily at Hilary and Obama? That minute, no one knew, or cared, but as the months continue to move on the calendar, this question will not go away, and it’s one that friends have to ask friends about every step of the way. 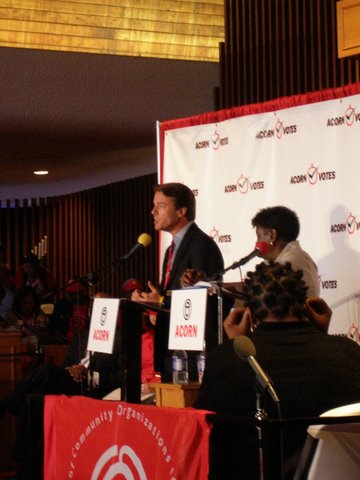 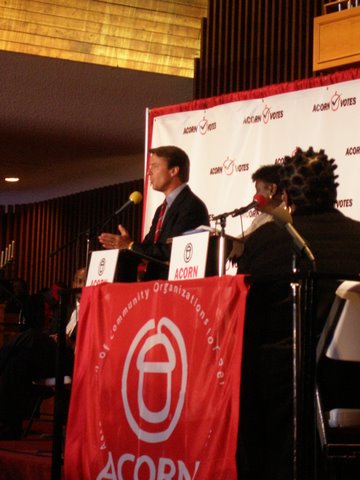