Philadelphia Congressman Dennis Kucinich is a loud shouting, rip roaring rabble rouser of a fella. He starts talking and can’t hardly stop himself and next thing you know he’s three-quarters of a way into a stemwinder, and Katie bar the door until the wind goes by or blows it down. Half of the time he is bringing us back to Cleveland and his stint as Mayor there 30 years ago as a young man. There’s obviously still a hard, sore place there. He was the infant terrible who was elected at hardly 30 years old and then brought down by the forces that be, until he came back as Congressman and now candidate for President for his 2nd go round.

But for all of his populism, all of his railing against the rich, the corporations, the predatory lenders, the hedge funds, and the rest, and for all of his stories about growing up poor before a crowd that knows a lot about growing up poor, and the number of times he moved as a kid, and the fact that his family never owned a house, and the fact that his dad died with his first trucker’s retirement check uncashed in his pocket, and the fact that he has owned his house in one Cleveland neighborhood that he bought for $22,000 in 1971, what the ACORN members went literally crazy about was Kucinich’s remarks against the war. They were up on their feet and shouting!

It’s a barometer for how complete the opposition to the misadventure in Iraq has become that these low and moderate income families with sons, daughters, husbands, and grandchildren fighting now in Iraq are now so completely united with fists in the air, shouts, and applause to the anti-war message that candidates bring to them, including Congressman Kucinich. It wasn’t that long ago that I listened to the leadership debates about whether or not — despite many of their personal opinions — ACORN could take a position around the war at all. Now, the members as a man and woman seem totally committed to almost anything that gets our troops home and gets sand out of our teeth.

Candidates of all sizes and shapes need to note that well. Iraq was not one of the six questions ACORN asked but when Kucinich went there, he had the crowd for that minute totally in the palm of his hand. 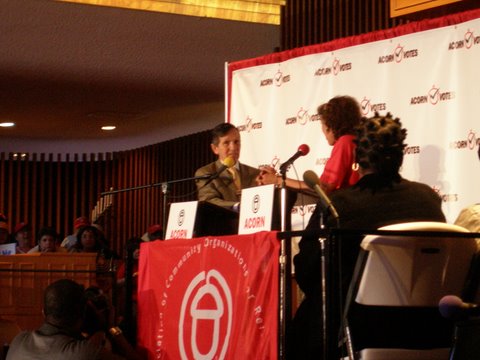 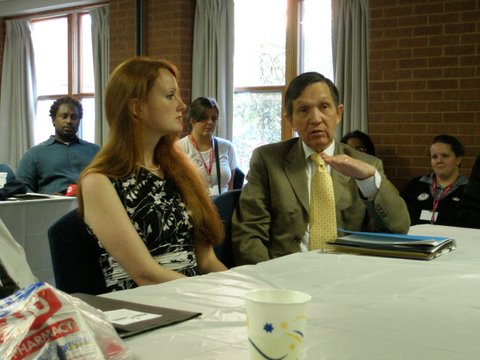