New Orleans Senator John Edwards began his “Road to One America” tour with the first stop in New Orleans in the lower 9th Ward. Not surprisingly, his campaign reached out to ACORN, having played a lead role in the fight to save the lower 9th, so that ACORN could point the way. A picture on his campaign blog shows him walking with ACORN leader, Vanessa Gueringer, and ACORN New Orleans Head Organizer Tanya Harris, down Delery Street and noting the changes. A picture and story at the front of the Metro section of the Times-Picayune also shows Tanya over his shoulder and notes that she led him through the crowd along the hand painted streets signs of the lower 9th. The story also talks about ACORN’s efforts to rebuild and highlights the two houses that have been built on Delery by ACORN Housing with financing from Countrywide.

We are willing — and able — to help any candidate, left, right and center who cares about New Orleans, our recovery, poverty, and what it all says about equity and justice for all citizens. We hope they all walk in our shoes in the lower 9th for a while. The more that they do so, the better the future for all Americans. Senator Edwards, perhaps not surprisingly, has jumped into the streets first, but we hope he will not be the last.

Read for yourself the article from the Times-Pic and the squib from the campaign blog…
Edwards visits N.O. to begin poverty tour
Posted by By Katy Reckdahl, staff writer July 15, 2007 10:28PM

Until Democratic presidential hopeful John Edwards drove onto Delery Street Sunday night, the three children had been tossing a football in front of their grandmother’s FEMA trailer. Flip-flops slapping on the concrete street, they ran down Delery, toward the moving huddle of cameras topped by three big fuzzy boom microphones.

“Who is he?” they asked, pointing at Edwards and his wife, Elizabeth, who calmly walked in the eye of the huddle with Tanya Harris, an activist with ACORN, the Association of Community Organizations for Reform Now.

Just as the light was fading, the former North Carolina senator arrived at Delery Street in the Lower 9th Ward with two vanfuls of national and foreign reporters. The lightning-quick visit to Delery, followed by a tour of the nearby Rev. Martin Luther King Jr. Charter School, were the first stops in a three-day, eight-state “Road to One America Tour” that will focus on poverty in America, one of the senator’s key issues.

Edwards’ tour this week is meant to echo the historic 1968 poverty tour made by then-presidential hopeful and senator Robert Kennedy. Today, Edwards begins his morning with the ABC-TV program “Good Morning America,” broadcast live from the Cabildo, and will visit Kingsley House and Cafe Reconcile before he leaves for Canton, Miss. During the New Orleans leg of his tour, Edwards will focus on the sluggish pace of recovery, the need for good jobs and solid infrastructure, and ways to keep the city safe, both from hurricanes and crime.

Before the tour, he outlined a recovery plan that includes calling on the U.S. Veterans’ Administration to build a new hospital downtown — something city officials see as vital to sparking economic recovery — and proposing a jobs program to help 50,000 Gulf Coast residents gain work skills.

This was Edwards’ sixth trip to New Orleans, and seventh to Louisiana, since Katrina hit in August 2005, his campaign said. He is scheduled to return to the state Saturday for the Louisiana Democratic Party’s annual Jefferson-Jackson fundraising dinner.

Edwards’ first stop was just off Delery and Tonti Street, a corner still marked by handmade street signs, red with white paint. Edwards visited the home of Gwendolyn Guice, 60, who in February moved into a new house on the lot where she’d lived for a quarter-century. Guice and her neighbor, Josephine Butler, were able to build new homes because of financing from Countryside Bank, based in California, arranged by ACORN.

An hour before the campaign blew into her block, the crickets were trilling in the shoulder-high weeds next door as Guice checked her house to make sure it was presentable. Over the couch is a photo of four generations of her family, starting with her and ending with her 3-year-old granddaughter. Before Hurricane Katrina, everyone lived within 10 minutes of here, she said. Now her family is far-flung, from Cleveland, Ohio; Fayetteville, N.C.; and New Iberia. “They’re all gone,” she said. “And that’s a hurting thing.”

The Edwardses also stopped at the FEMA trailer of Henry Phipps, 63, who hopes to move his family back there soon from the West Bank, where they’re now living. “I don’t know where he came from, but it was nice for him to come around,” said Phipps, who owned and ran the nearby Phipps Inn before the storm. He showed the couple the work he’d completed on the brick house that he’d owned for 18 years, and then they were on their way.

Then it was quiet again on Delery Street. But it had been an exciting half-hour for three of Phipps’ young neighbors: Sierra and Destiny Jones and their brother Cedric Dent. “I wish that man could get everybody back home,” said Sierra, 12. “Maybe he can get everybody rebuilding their home and get that Road Home money,” said Cedric, 10.

“Can he save people from another hurricane?” asked Destiny, who’s 7. That’s something she worries about a lot, she said, as two vans filled with journalists drove away behind her.

We just hit the ground in New Orleans, where the “Road to One America” tour begins. We’re in a car now on our way to the Lower 9th Ward. It had been raining all day, but the rain has stopped in time for our tour.

A few minutes ago we passed Ms. Tyler’s house. I recognize it because John helped rebuild it, and it’s where he announced that he was running for president back in December.

A gentleman who lives in New Orleans and helped us plan this tour was just telling us about his experiences since Katrina. He was finishing classes here in New Orleans when Katrina hit. After the storm he went to finish a semester in Texas, and then returned to NOLA to resume his classes in a hotel. He told us about how his grandfather passed away a few months after the storm. He said that from what he saw and heard from friends, this is sadly common – a lot of elderly people couldn’t handle the stress of the hurricane and its aftermath, and passed away shortly after the storm hit.

We are walking around the Lower Ninth Ward, one of the areas hit hardest by Katrina. I have to say, this area is still devastated. It’s hard to imagine that it’s been almost two years since the storm hit. It really makes you realize how incredibly insufficient our government’s response to the storm was and how many people’s lives were ruined as a result.

We just met a man named Henry Phipps. He’s been living in a FEMA trailer for the last 2 years. These trailers are not big by any means – they could easily fit in your average driveway. Tomorrow he is putting in the baseboard at his home – almost two years later. He told us he has received no help getting back on his feet.

We just finished a tour of the Martin Luther King, Jr. Charter School for Science and Technology in the Lower 9th Ward. This school is a testament to the dedication of this community. It was their effort that built this school and community center. The dedication of these teachers to the students and their community is heroic.

John Edwards and his wife, Elizabeth, with Tanya Harris and Vanessa Gueringer on Sunday in the Lower Ninth Ward in New Orleans.
Pic from Edwards’ campaign blog 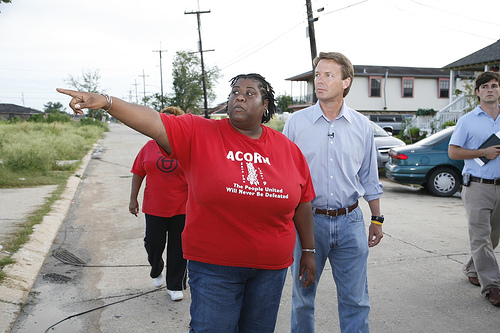