New Orleans      Several years ago the Organizers’ Forum (www.organizersforum.org) delegation visited an Indonesia meeting with organizers from community based groups and unions throughout the country. These were times of change in the aftermath of authoritarian regimes, as citizens organized to express newly won rights and entitlements. We were particularly impressed with the Urban Poor Consortium (UPC) and its remarkable director, Wardah Hafiz, and her staff and program, which were national in scope and combined direct organizing and action in urban poor communities with programs attracting external resources and slick power points. She was also spending huge blocks of time in Banda Aceh dealing with the results of the tsunami and administering rebuilding programs there that especially resonated with me since I was still reeling from Katrina when we were there and had not even been able to return home yet. I promised then that I would come back and work with them on building a membership dues system. They invited me to the first anniversary of the tsunami when they holding a ceremony in Aceh to commemorate the event and their work, and I was denied a visa, so I could not attend.
When Wardah and Na Hyo Woo, our Korean organizing comrade, contacted me several months ago about the upcoming election for Governor in the state of Jakarta, they were both outraged at the situation and desperate for help. The outrage centered on the lack of access to the ballot, the “money politics” that controlled the candidate selection, and the insensitivity to urban poor issues. Wardah was even considering a protest candidacy if it were possible. The desperation centered on their lack of experience with elections of any kind and their need for help in navigating this world. It was impossible for ACORN International and ACORN not to try to respond and help. Several weeks ago Krista Holub, one of ACORN’s top political operations staff based in Philadelphia, flew over to fulfill our promises of help and solidarity.

With the election coming soon and the campaign intensifying, this will be the first of occasional reports on the struggle for effective free and popular elections in Jakarta, one of the world’s great cities. Here is a brief report from Krista:

The August 8th election for Governor of Jakarta is a monumental event. It will be the first direct vote to elect the Governor. UPC’s goal is to use the election to negotiate with the candidates on urban poor issues, to increase their membership base, and to train staff for future election opportunities.

Wardah, the Director of UPC, invited organizers from the 23 Jakarta
communities where UPC has programs, as well as organizers from cities across Indonesia, to participate in the training and campaign. In total, 37 energetic organizers are working on the project.

My first week in Jakarta, with the help of UPC staff, I conducted trainings for the organizers on door-to-door campaigning, the Rap, and using elections to build power in communities. The first day of door-knocking was particularly memorable as the 37 organizers set out to test their new skills and came back with many stories to share.

There have been challenges along the way such as the local officials
attempting to block our efforts. And more amusingly, it’s been hard to go from door-to-door because people in the neighborhood are curious and gather around to find out what is going on! But the organizers have collected over 4,000 ‘Count on Mes’ and are sharpening their organizing skills every day.

The next step is a candidate forum on the 29th of July on the following five issues: poverty, evictions, flood control, job opportunities, and traffic control. After the forum, the organizers will do Get Out the Vote efforts leading up to and on Election Day. While we will only mobilize a small portion of the 5.7 million voters in Jakarta, our message is strong as we join community voices together and organize. 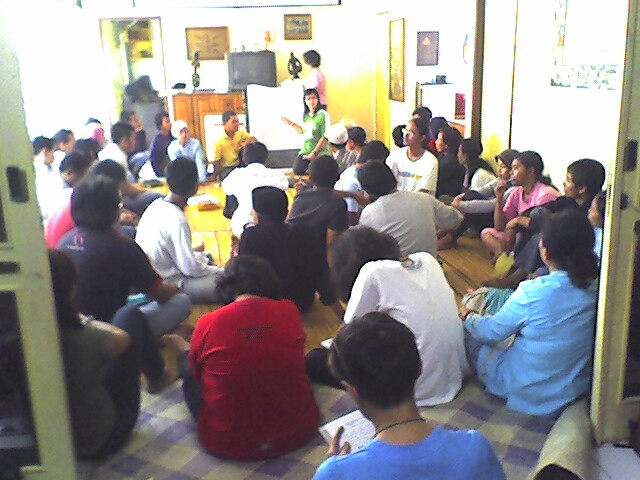