San Francisco Latest news from ACORN political organizer, Krista Holub, who has been over in Jakarta working with our partner organization, the Urban Poor Consortium, is that the Candidates Forum went very well, all things considered. There were 6-7000 people in attendance. Only one of the candidates, the underdog, Adang attended, which was unfortunate.

This was a new experience for UPC and its supporters, so there were rough edges dragging in some areas, as I would expect from any first run outing, but the turnout plan and the organizer outreach produced excellent numbers and lays the groundwork for the organization to play a larger role in future elections. Surprisingly, despite the decision to allow independent candidates on the ballot, there were no provisions for this to occur and now delay in the election scheduled for August 9th.

Preparations for the election and a potential UPC endorsement of Adang, solely because he seems at least willing to take the organization and its concerns for the urban poor seriously, are going forward with uncertain outcome. This building democratic practice and traditions from scratch in Jakarta is very rough going! 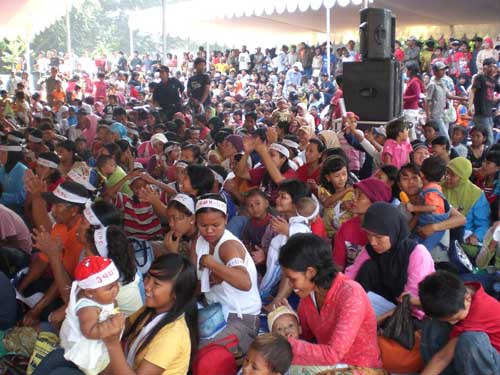