Sausalito Every year ACORN gathers several sets of its newer organizers into a mid-level and an advanced training session somewhere in the country. In recent years we have met in and around Los Angeles. This year we met at a YMCA on the Marin Headlands across from San Francisco and by climbing a hill one can see, depending on the fog, the Golden Gate Bridge. Above the pillbox on Point Bonita on the northern rock gating the entry to the Bay, you can look all the way west across the Pacific.

These are national park lands because they were military sites. The first guns were put on Point Bonita in 1905. In WWII the concrete pillboxes were built all over the hillsides, where I have run the last several mornings, to be ready to handle the Japanese as they came pushing into the Bay. On the hillside a half-mile down from the YMCA the military maintained Nike missiles in later years. Running through black tail deer so thick I could almost touch them on the hillsides down to the beach where the early surfers try the small waves on Rodeo beach, it was strange to look from the wild and beautiful to the stark concrete carved and set into the green, sandy hillsides.

If that was not enough of a contrast, the advanced organizers spend the better part of the day trying to wrap their arms around the notions of “urban regime theory” following Clarence Stone and applied to community organizing in several contexts recently in the book Transforming the City edited by Mario Orr. We were also contrasting all of this to the old Michael Lipskey formulation of how the powerless move targets to create change through protest. Heady stuff! Luckily we were in the Headlands!

Stone classified cities as having one of three different kinds of urban regimes: corporate, progressive, and caretaker. Our group went through their cities and then worked on prototype groupings that identified the different strategies that a community organization would use to try and build power, conduct campaigns, and develop relationships and alliances in order to operate within these different political and social ecologies. We were all clear that we were on thin ice having often operated as if all cities were the same and then instinctively or with luck made adjustments and adaptations that might have fit the situation more aptly.

We also spent time looking at the limitations of “place” in organizing and how race intersects with place and community organizing. There was more stumbling and stuttering to get there, but it was worth the walk.

This is a great experience for the newer organizers and the old bulls like myself find it a wonderful brain strain as well, as we both try to make the work more effective and powerful. 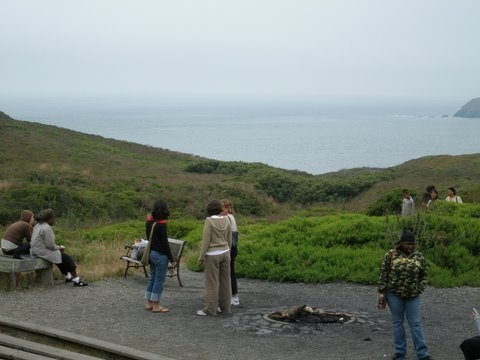 The landscape overlooking the Pacific
The group of organizers 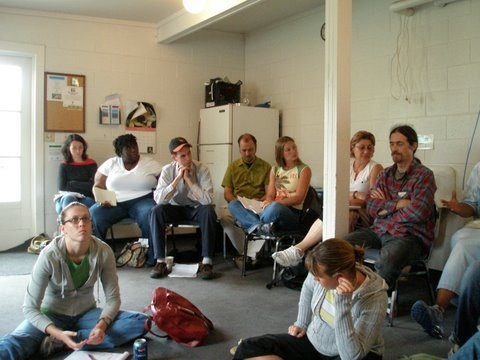