San Francisco         August 9th in India is an important marker of the independence of the country and its fight against colonialism. This year it also has become the rallying cry to stop the efforts to modify foreign direct investment in retail and the block the invasion of big box retailers like Wal-Mart. The India FDI Watch Campaign that ACORN has helped support and organize is a leading member of the huge coalition that is pushing Quit India Day as a mass mobilization on a national level around this issue.

The run-up to these events is being carefully followed by the media, politicians, and parties as a bellwether of the support of the effort. The expansion of India-based Reliance through their Reliance Fresh outlets is seen as the harbinger of disasters for the estimated 20 million small traders, shopkeepers, hawkers and others currently providing this consumer service in the country.

Dharmendra Kumar, Director of the India FDI Watch Campaign reported on dharna (action) along these lines on August 1st:

Traders staged a dharna in association with India FDI Watch before a Reliance Fresh shop in Delhi. Here is the news

New Delhi, Aug. 1 (PTI): Launching a fortnight long country-wide agitation against retail chains, a group of traders and activists today staged a demonstration outside a prominent outlet in the capital.

Scores of protesters, belonging to Confederation of All India Traders, All India Hawkers Association and India FDI Watch, staged the sit-in in front of ‘Reliance Fresh’ outlet in Paharganj in New Delhi district as part of their "Retail Democracy Fortnight".

This fight continues to gain support in India as well as in the global effort to help prevent the adverse impacts of Wal-Mart and their widely copied business model.

August 9th will be a day worth watching. 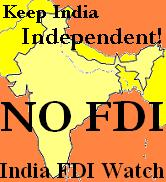