Buenos Aires        I was here a year ago in August shortly after the office of ACORN Argentina opened.  I was here again six months later in February and the portenos were still talking of the improving economy and general national prospects.  Now, another six months later even the remis (long distance cab) driver commented in the first couple of kilometers about the climatica (climate change) and the crisis energetica (the energy crisis).

Talk of the crisis was undeniably on everyone’s lips, recognizable even in my poor Spanish.  It was early Saturday morning as we drove into the city and there was still traffic leaving on the expressway as some portenos drove to their estancias en campos (country ranches or homes).  A risky proposition because energy shortages were trapping many people without heat during these winter months and forcing them to drive right back home again.  Everyone had stories of relatives and friends caught in such a loop and hardly advised going anywhere out of the city. The sky was clear blue but the 34 degree temperature did not encourage taking a chance that one would find no heat on some weekend jaunt.

President Nelson Kirchner also blamed the mounting inflation on the crisis eneregtica.  Hugo Chavez of Venezuela had recently visited to offer more support on the energy problems and the supply of oil to the country.

Inflation was serious.  The first seven months national CPI (consumer price index) went up 4.1% in 2007, but over the year ending in July had increased by 8.6% — essentially in the year since we had opened the office.  When ACORN adjusted all of our pay scales in January to hold people even with inflation, our staff in Argentina had gone up 8% almost tripling any other place where ACORN worked in the world.

Walking into neighborhood convenience stores, which in Buenos Aires are called chinos (undoubtedly an unfortunate cultural slang!), it was easy to see some of the differences.  Fruit seemed to three times more expensive.  Meat, which is at the center of the diet here, seems to have doubled.  Most of this is attributed to the cost of trucking goods into the city and the increased cost of gas.

During the economic crises here several years ago, portenos would buy bread in the morning and the price would have increased by the evening.  Everyone agrees that it is not that bad, but everyone also says with foreboding and dread that they cannot imagine what might happen after the elections, fearing that we are only seeing the leading edge of the crisis now. 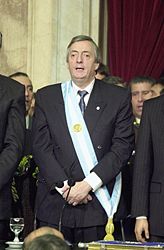