Buenos Aires Having a pity party in Buenos Aires for a pathetic minute. Part of my work here over the last week has been starting the “Katrina book” tentatively called Dat 9: ACORN and the Fight to Rebuild New Orleans. In addition to tending to our office here, meeting new staff, visiting with some allies, and making plans for our Latin American operation to open new offices in Mexico City and Santa Domingo, I wanted to get a running start on this thing and get the first 20,000 words roughed in. I was making good progress through Sunday and had over 18,000 done and completed the intro and first two chapters, when yesterday at dawn, I had a total and absolute computer shutdown. I should have known it was coming, if I was anything other than a techno=peasant. The day before the darned thing had crashed on me 9 or 10 times. There were a couple of paragraphs I must have really liked, because I sure did get the chance to rewrite them three or four times!

Anyway I was thrown back to the past for a minute, and it was a good reminder of how our tools have become such an automatic extenison of ourselves that we are temporarily immobilzed without them. Finally I snapped out of it and managed by the hardest to use a borrowed computer with Spanish prompts and instructions to do what I had to do and lay down another 2800 plus words and keep pace. In the world of good globalization (like cholesterol there are good and bad kinds, ok) the mighty Chih may not be able to fix my computer with the magic of PC Anywhere this time, but the miraculous Nicole can ship me the old one so that I’m back in business by Friday when ol’trusty meets me in Quito. And, for all my whining one of my cells has been working, and the Tmobile people have a rock’n blackberry connection that has worked in Argentina, and I’m hoping it will work in Ecuador as well. If not, I may be on radio silence for two or three days and back to the land of internet cafes in the middle of the night, but the truth is that was the way I had to travel all of the time in this part of the world and elsewhere as recently as three years ago. How quickly we convert slight advantages into permanent entitlements.

Anyway, the better part of the world has these aditional reports that make our time so amazing for our work:

* Krista Holub reports from Jakarta that the turnot program had good results, and in some cases managed to enfrancise significant numbers of people. Our partner, UPC, endorsd the candidate that came in by a fairly distant second, but seems to have learned some lessons that may help them improve their program in coming gubernatorial elections in other provinces of Indonesia.
* John Anderson and the gang at ACORN Canada’s office in Ottawa were pleased to see that their concerns over lead paint in children’s toys was big news in all of the Chinese language papers on the mainland of China, but wondered why their neighorhood actions in Ottawa did not make the front pages as well.
* Emily Anderson and Orfa Camacho reported yesterday that ACORN members in the megaslum of San Juan Luirgancho had somehow gotten together a truck full of supplies and clothes and put them on the road yesterday to the epicenter of the earthquake zone. Talk about those with little helping those with less = wow!
* And, Ercilia Sahores and the ACORN Argentina staff used their holiday yesterday to take the more than an hour long bus trip out to La Matanza, the megaslum where we are now moving new organization in the province, to visit Rossi, one of our organizers just recovering from an operation, and preparing soon to open our satellite office there.

What troubles was I dealing with really? Nada. I made it through and after a moment’s whine was back in business with only a little bit of inconvenience, and what really is inconvenience in the scale of things. Not much!

Of course, I’m not sure when they may get to you, since I’m squatting on someone’s wireless in the neighborhood here and it’s off now, so it could be a while…. 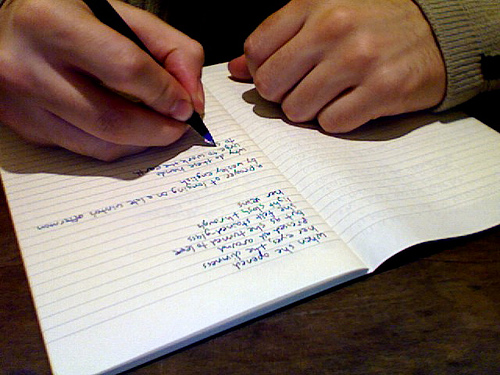 What we all did before computers…