Lima        Changing planes in LIma for Quito, I’ve now left the area of south America where one reaches for water from the tap without concern.  Peru can be dicey, and Ecuador will be an education, all of which makes me think of the irony of bottled water.

The Economist magazine recently reported that Aquafina, owned by Pepsi, was changing its label to spell out PWS rather than simply listing the abbreviation.  PWS means “public water source,” which translates into tap water folks.

They are hardy alone.  Dasani, owned by Coca-cola, is also nothing more than filtered tap water (though I have overheard people swear they buy it and pay the premium for the extra “minerals”), but the company spokespeople claim they are not changing their labeling because essentially people already know its nothing more than “purified water.”

Only Pepsi and Coke could probably figure out how to rebottle tap water and resell it at a premium to unwitting consumers lining up for the hustle.  I guess eskimos would buy ice?

Why are we fooled? 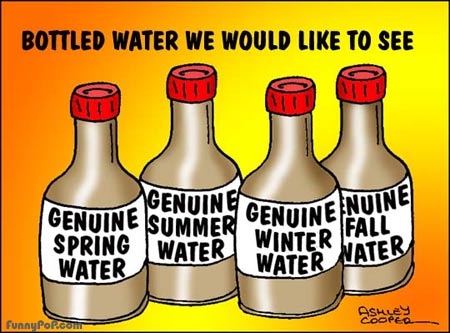