Quito        I’m tapping this out while listening as best I’m able w/ my crippled Spanish to what most resembles a bad cell phone connection with sentences and phrases coming in earshot between long silences in between.  The panel is high level.  Raphael Correra, the Ecuadorean President, came into this crowded room in the dramatic Cuidad Museo del Quito in the old colonial hospital in the historic district to listen to the last couple of speakers before he makes his remarks to close the conference.

The panel is talking about the role of the state in developing socialistic alternatives to counter globalism and inequity in Latin America.  The country of reference here all day has been Venezuela.  Tonight Brazil is getting some play, but clearly all eyes and ears are turned to the northeast and Caracas.

The same experience was mine this morning in Cuenca where I flew at dawn with a precious few hours of sleep.  There the topic was the impact of social movements on the state.  I argued that the evolution of mass organizations was critical, that they had to be independent, sustainable and permanent.  People were polite.

Here are some of the things I have found interesting in my hours of listening:

In a way, there is a Latin American consensus developing, and neither Cuba nor the USA is used as a frame of reference.  The old Washington "consensus" was not mentioned until the President did so moments ago.  People are excited and seeing solidarity and frames for study by looking over their neighbors’ fences.

President Correra is walking an interesting line saying that modern socialism is democratic and based on unique national models and not implants.  He is arguing smartly for principals-not models-with constant reformulation and construction and with constant adaptation to national and regional realities.  Smart!  Not signing anything but going his own way with a argument for labor over capital and a history and political science lecture for the crowd.

The other thing that is different down here is the invisibility of labor, especially organized labor.  Not big in Venezuela and not big here.  At best part of a long list but nothing more.

They have a poster here of Marx with an i-pod in pink.  It’s clearly about taking and holding power and not about any ideology he would recognize.  I think he’s listening to Shakira. 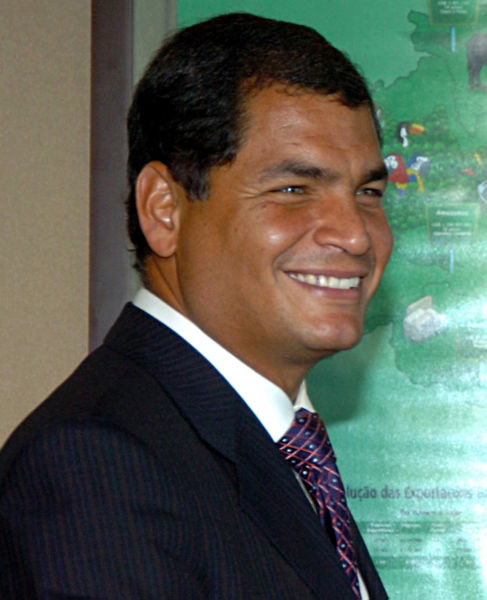