Quito        Talking to people about workers and working conditions in Quito, repeatedly the problem of subcontracting came up quickly.  This was not the usual run of the mill, subcontracting but a situation of legal avoidance brought to an extreme.

Every enterprise was required by law to pay formal workers in public or private firms certain minimum wages and benefits, so in order to skirt their responsibilities and of course drastically reduce their employment costs, some firms would have as few as one, single formal worker on their payroll, since they were required to have someone at least, but all of the rest of the employees would be cut to the bone in this curious status.  The new government of President Rafael Correra, in its first year of power, had tried to tighten up enforcement with new rules in this area, including requirements that at least 50% of the staff would have to be formalized.

Unions attracted some of the blame, despite their fragmented and weakened condition in the country, largely it turned out because of fairly peculiar but not widespread collective agreement agreements in one or two of the more wealthy state enterprises like oil, telephones, and banks.  There was a two-day trolley strike during my visit that resisted settlement over the issue of whether or not a $500 payment was made in the event of the death of a father-in-law.  The most spectacular excess, repeatedly explained to me, in some of these agreements allowed workers upon retirement or death to allow their sons or daughters to inherit their jobs, regardless of merit or qualifications.  Even the left took many of these stories as universal and gospel, besmirching the labor movement even farther.  It turned out that these situations might have been ridiculous but was also extremely rare.  Many governmental workers have not had a raise in four years we learned, and even top members of the new government seem lucky to get one out of every two pay checks.

I met with the Minister of Labor, Antonio Gagliardo Valarezo, at some length along with Matias Ramia, who had worked with WARN and the Wal-Mart Workers Association out of Tampa, about the problems of enforcement of these new initiatives to prevent the abuse of subcontracting.  He maintained gamely that they were getting ahead of the problems, and as we left his offices he was holding a press conference to announce the fining of 120 odd companies for subcontracting offenses, but the fines were only $200 per company, not much of an impediment to many.  Clearly he was trying to stretch thin resources over a huge problem across the country including a huge child labor issue as well.

Meeting later during my visit with the Co-Chair of the Constitutional Commission, a bright, young lawyer (the only woman, only lawyer, and only person under 60 on the Commission), it seems that part of the hope here is in the writing of a new Constitution that more nearly represents the programs and policies of the new left-leaning government and its concerns to shore up workers rights and freedoms to build unions and make them both strong and honest.  She also left our meeting to meet the press and announce the labor section to the public.  All of this process rests on the outcome of the elections for Assembly at the end of September and then a six month timetable for passage by April 2008.  Seems daunting to me, but I was informed at a dinner in the Palace on Wednesday by the man sitting next to me that in the “… USA, you may know how to write software and built cars, but in Ecuador, we do constitutions!”  It turns out that this is the 19th Constitution, the last one having been enacted in 1998.

The proof is in the pudding, but this is an exciting situation now in this country. 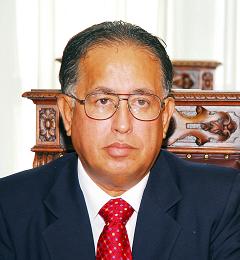