Paris        It was not part of the plan, but it seems I’m spending the day in Paris or whatever suburb the Charles DeGaulle International Airport might call home, having flown overnight from Atlanta, landed at 10:30 in the morning this time and now delayed so that I won’t leave here, if lucky, until 6:15 pm, allowing me to hit Moscow about midnight.  So borrowing the title of the famous masterpiece of war, All Quiet on the Western Front, that seems where I am as well while preparing to join our delegation from the Organizers’ Forum on our annual international dialogue.

We chose Russia after experiences in previous years in Turkey, Indonesia, South Africa, India, and Brazil, because of the turmoil of change and repression in the country particularly for non-for-profit organizations.  Barbara Bowen, the indefatigueable coordinator of the Organizers’ Forum, swears every year is harder than the next, but in full truth, found organizing the Russia trip surpassing all others by a significant degree.  Help from Citizens’ Consulting (CCI) stalwart, Denis Petrov and his wife, turned out to be critical in helping bridge the language barriers and communications challenges.  The die is cast and we will learn what there is to offer now.  Barbara reports all hands are already on deck in Moscow, so it remains for me to catch up and get in the mix.

Flying to Paris was, as always, an opportunity to catch up on reading that can wait, and some of the pieces were worth the wait.

I was pleasantly surprised to see Ryan Lizza’s piece on the “Legacy Problem” in The New Yorker giving straight up props to SEIU on the success of our push for comprehensive health care:  “The Service Employees International Union, one of the most liberal unions in America, has successfully pushed every Democrat in the race into supporting universal health care.”  Not only accurate, but amazing as well, because of the distance the union itself has traveled in coming to embrace universal coverage as winnable compared to our stance several years ago.

Opening up the October edition of Harper’s Magazine I was even more surprised at the call being issued by one of their editors, Garret Keizer, for a general strike “on Election Day, November 6, 2007, for the sole purpose of removing this regime from power….”  Huh?!?  Have we now come to the place of such frustration and desperation that even in Harper’s there is a passion for the old school, hit the bricks, anarchy for all, and shut it all down general strike.  The fact that it was all news until I opened the magazine 7 miles high over the Atlantic probably says what legs are under this, but still….

Even more surprising in some ways was reading Naomi Klein’s essay excerpt from her forthcoming book on “Disaster Capitalism:  The New Economy of Catastrophe” in the same issue of Harper’s.  Because ACORN is spending so much time and energy trying to think about disaster preparation in advance of the next situation because of the lessons we have learned from Katrina, I had already ordered Klein’s book on Amazon and was still waiting for delivery.  I had not been a big fan of some of her pieces on New Orleans and Katrina that I had seen because I thought she was skimming the surface without fully engaging the complete realities, but all is forgiven now, because she nailed the issue of privatized disaster firms feeding at the public trough in Iraq, New Orleans, and elsewhere.  Her arguments were specific and relentless and confirmed what we had seen on the ground firsthand.  Had we stumbled into her, we might have been able to provide her even more evidence.  Now, I’m looking forward to this book!

Earlier I read the 2 inch thick folder of articles Barbara had assembled for our delegation and in the haze of the my foggy head and the scenery outside of the airport window tried to put those pieces together with the books I had read in order to get ready for this trip by David Remnick, Adam Hothschild, and Anna Politkovskaya, the recently assassinated journalist.  The books made me feel that I had been in denial about Russia for years and somehow while hoping there had been great change, I had never fully reckoned with the depths of the problems under the Communists and the difficulties of the recovery for the people and institutions.

Let’s see what we will learn together over the coming weeks. 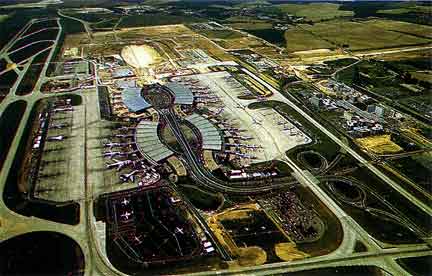