Moscow        Many of us were perhaps a little the worst for wear, but Kirill Buketov, an organizer for the International Union of Food Workers (IUF) had also flown in the previous night from Seoul, so no one was likely to notice.  Kirill had begun his career on the shop floor in 1989 and was a young man still filled with the energy and passion of organizing in a tough environment.

The IUF is one of the global union federations that has opened an office in Moscow and supports staff and campaigns along with a half-dozen other such global federations.  He had a story to tell as well, since from 1997 the membership in the IUF had risen from 3,500 to more than 50,000 dues paying members.  Not all of these were new units, but all of them had affiliated in that period, so progress was being made, especially with TNCs or Transnational Corporations.

The standards for determining unionization for Kirill were as simple as the law allowed:  three (3) workers willing to stand up and say they were a union.  Some had achieved majorities and some had not.  Some had managed to achieve contracts through collective bargaining and some had not.  From Kirill’s description the key really was as straightforward initially as getting workers to assert that they in fact were part of a union.

He described his biggest obstacle as confronting, even almost 70 years after his death, the “inner Stalin” inside of so many workers when they thought about unions.  Many were still afraid that organizing and standing up could still earn them a trip to the gulag or the firing squad, as it had been in the Stalin purges.  Kirill was graphic in describing the initial “argument” with a worker as “talking to his little Stalin” and making him disappear.  There is the fear that all organizers have to meet and push back, but in Russia he made the point well that the fear is so colored by the facts that it has to be met clearly.

When they first started organizing they wanted to find someone who might still be alive who could share with them the memory of what trade unions had looked like before Stalin’s repression, so that they had a feel for where they were going.  They finally gave up on this task, unable to find anyone anywhere in the country.

In targeting a lot of their work is against multi-nationals because that is what drives the resources and seems to be a stable place for their work and in some cases leverage.  He shared a chart of where they had been successful.  It was easy to recognize the names.  A recent spurt of work at Coca-Cola plants had gone well.  McDonalds’ had been a target, even though their stores in Moscow were more than 5 times more profitable than similar stores in New York City.  Nestle’s had been a target where they succeeded more often than not, including in the water subsidiary where they are currently purchasing in Russia.  They had organized one or two Cargill plants.  Marriott had been a disaster and I saw no hotels that went well.  Currently because of encouragement and request from SEIU and Unite HERE they had been doing a lot of work with the French foodservice operator, Sodexho.

Kirill complained, as organizers often do, about the travel, since he was getting pushed to organize a lot in the eastern part of the country now.  Looking at the map though, he had a point.  It is a 9-hour flight from Moscow to the far eastern port cities of Russia near Japan.  It is night in the east when he comes to work in Moscow in the morning.  Kirill said, as we have found, that “without internet” it would be impossible, but it is darned close to impossible now.

Russia in geographic mass is the largest country in the world still with a population of 140,000,000 — less than half that of the United States — spread over this huge expanse.  And, what too many of them share is a memory of Stalin and a confusion of how to move forward in times that switch between democratic and autocratic impulses more quickly than the weather. 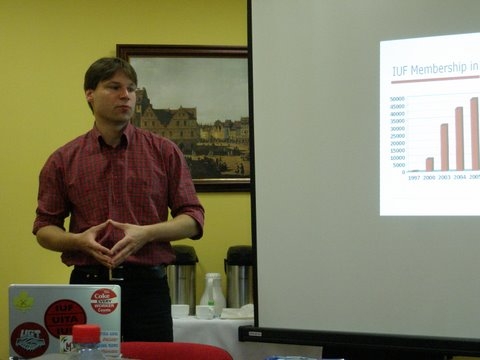