St. Petersburg         St. Petersburg is a dramatic city built around islands, rivers, canals, and bridges and somehow we ended up yesterday in sunshine even as the temperature turned slightly more crisp. Little did we realize what a rare blessing this might be until we found that on the Baltic and at the same latitude as Alaska, St. Petersburg only enjoys 40 sunny days a year, though some of them are “white nights” in the summer when it is almost never really dark. Even as we met with more people here, I was struck by another blessing that has been a highpoint of the Organizers’ Forum (www.organizersforum.org) meetings. This great luck were two almost coincidental meetings, one in Moscow and the other here in St. Petersburg.

On our last morning in Moscow we had a meeting that to some seemed at first almost like a burden of manners. We were going to visit the Russian Research Institute for Cultural and Natural Heritage. Pat Sweeney of WORC (www.worc.org), one of our board members, had connected us to Tamara Semenova, who he had met on a trip a decade earlier, and they had provided the invitation for our delegation for our visas. We were treated to excellent presentations by the Institute directors Alexander Yeremeev and Slava Stolyarov. Slava had a fascinating presentation on the efforts to rehabilitate a Russian monastery that had been on the island in the White Sea famous as one of the prisons widely written about before the fall.

There was an afterthought presentation that seemed to not add up at all though. After Alexander and Slava had excused themselves to other duties, she introduced a woman, conservatively dressed in her mid-30’s, who had been sitting along the side. She had asked the learned speakers several questions earlier that seemed to have an edge to them about the “practical value” of their work, so it was already clear that she had an edge of some kind, but that also might have been a chip on her shoulder. Yevyenia Chirikova stood ramrod straight before us and began her remarks. It developed that she was trained as an engineer and she and her husband had moved to the outer ring of Moscow to live with their first child in order to be nearer to better air and nature even though it was more than an hour commute into the city. While expecting her second child rumors developed that in the large forest area, some thought to be virgin, near where they lived there were suddenly plans to build a highway of some kind through the forest area.

She tried to find out the facts but was thwarted at every turn. She began talking to neighbors and found they were also worried. The government denied any activity, but then they found a spot that seemed to indicate work was starting already to clear a piece of the old oak forest. The more she learned, the madder she got, and the more she felt like she should do something even though she had no clue about what to do. She began to enlist more of her neighbors around this threat to the forest. They started taking action. They put up a website (www.ecmo.ru). They started passing petitions that now have more than 5000 signatures asking President Putin to halt development and protect their forest. They talked to Greenpeace for help, but there was no interest in their forest because it was not a “national” issue.

She became more active. She and her new friends delivered leaflets in the dark of night calling for public meetings (they have had two now which are the equivalent in this society of a protest), so no one would know who was calling the meeting or single them out. People responded! Yevyenia said all of this without a smile, standing rigidly straight, but with anger and passion in her voice that transcended any translation.

She also was nothing but frank and straightforward. She was an engineer, not a poet, and she was honest. Looking at her hands chopping the air in anger, all of a sudden I would double take almost as the translator would say that she had to admit that she found the organizing “exciting” and that she and her new found friends felt like they were like “revolutionaries” as they organized these “meetings” and actions.

One could feel the passion in the lecture room! I could look at our delegation and see them all suddenly on the edge of their chairs, galvanized by Yevyenia and her awakening through this fight and her pure thrill at organizing, as they remembered how they had also felt years ago as they began the work. There was applause, sudden claps, and smiles. None of us had any idea where her “forty acre forest” might be, but we all desperately wanted Yevyenia and her fledgling organization to win this fight.

And perhaps for the first time, our hope for Russia and its future sprang from the room like a shout! 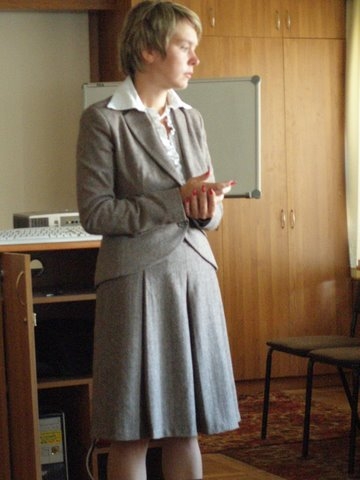