St. Petersburg        From almost the first conversations we had upon entering Russia, it seemed that everyone, whether labor or lawyer or civil society, would mention something about the excitement all over the progressive communities in the country at the strikes at the Ford production plant in St. Petersburg.    They would never say it quite that way, but in a country where there is constant and appropriate critical complaint about what has become the reassertion of state control of the press and media, this was clearly a story that had gotten around and galvanized people about the possibilities.   Workers taking action and winning against a big multi-national company like Ford would still exhilarate activists of all stripes.   Boris Kravshenko, head of VKT, had offered, after meeting us to reach out to the leader of the Ford actions, to see if we might be able to find him when we were in St. Petersburg.

None of this was easy.  Alex Etmanov was a welder on the night shift at Ford, so we hoped to meet him our first morning in St. Petersburg in a free moment before we hit the Metro for our first appointment with the Strategy Center.  At 10 we got a text message that he was running late because he had stopped for a meeting with some workers at the end of the night shift.  He would try to rendezvous with us at our first stop if possible, and as our luck would have it at the end of that meeting after learning about the work of the Strategy Center in analyzing budgets so that communities could lobby for different public expenditures, Alex started telling us about his union and continued his story with our questions at lunch across the street at a Chinese restaurant.

Alex’s story was a modern version of rank-and-file activism on the plant floor responding to issues that he and his co-workers had as well as information that somehow they were simply not paid or dealt with fairly at Ford when they heard about the working conditions and wages of workers elsewhere around the world.  The regular union was not able or willing to push the point, so they had organized an independent union that took matters in their own hands in what had now become a series of strike actions.

Alex’s definition of these strikes was interesting as well.  They had one “real” strike where they put down their tools and shut the place down briefly.  But they had also had a similar impact on Ford when they had done what he called a “pre-strike” where the bluff was better than the hand as well as two “Italian” strikes, as he called them.  In the Russian labor movement, “Italian strikes” are what the American labor movement would know as “work to rule” actions, where the works work rigidly by the book, dotting every “I” and crossing every “t” which has the impact of slowing down the work.  All of this shop floor activity had the impact of pulling together into collective action some 1500 of the 2000 workers at the Ford plant that produced Focus automobiles solely for the Russian market.  And, they had won on both specific issues as well as some wage increases, so they were on a roll.

Alex was in his mid-to-late 30’s, solidly built at medium height with the ever popular Russian crew cut and an open smile and sturdy and surprising English when he needed it.  He was loud and straightforward and easy to imagine as an organizer and as a leader with enough courage and charisma to get the job done.

What was perhaps even more exciting was that in the same way the country seemed to have caught the Ford fever, Alex had also caught the organizing bug.  In the wake of their own actions they had organized the Sodexho workers among the plant cleaners and janitors adding another 170 workers to their ranks.  He and his mates were also meeting with workers in other plants all around St. Petersburg to help them organize unions in the same vein.

Despite the weight of labor law and institutional unions in Russia, when talking with and listening to Alex, one could feel the old time religion of a real labor movement that could leap across time and territory as they evangelized first here and then elsewhere and believe that change was possible hear with help and support and great organizers like Alex having now found a religion believing in themselves and collective action that could take them past today. 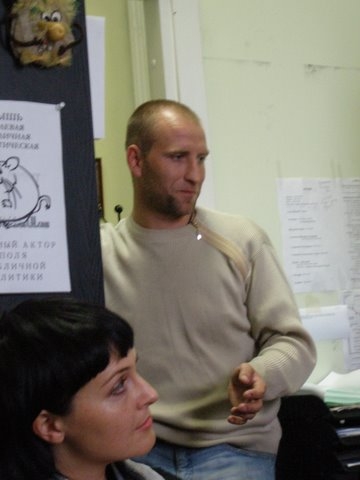