Helsinki         With apologies and the request for forbearance from all of my other readers I would like to once again honor my father’s usual request for other details and place notes on what is different or unique about Russia as it struck me personally on my visit. So by nature of his usual question when I return of “What did you really think, Wade?” here are some notes from the grounds eye view of what stands out:

* Virtually all men in the cities have short hair. Having been in Buenos Aires not long ago where there is nothing but long hair and even now in Helsinki where hair seems everywhere, it was startlingly how sheep shorn are the men of Moscow and St. Petersburg.
* For all of the wonders of St. Petersburg it is not only unsafe to drink the water but from time to time you can even smell the water when taking a shower. That was a surprise.
* The Metro systems in both cities were amazing! Built partially as bomb shelters they run at the bottom of the fastest escalators I have ever experienced and are both cheap and numerous. In both cities if you missed one there was almost certainly another coming 90 seconds later. And, they were jammed packed. The doors were dangerous. We had two of our people trapped by doors in our short week. The warnings were abrupt to non-existent and the doors were unbending on these old post-WWII vintage metallic cars.
* Do not ever become disabled in Russia! There is no access to most of the Metro systems that would work nor did there seem to be many accommodations of any kind.
* Best also not be a “believer” as one translator called members of the Russian Orthodox Church because you are forced to stand (there are NO pews) for the whole service and some of them on special ceremonial days like Easter can run up to 5 hours. People are still talking about Putin attending a service and standing the whole time. In the Peter and Paul Cathedral one could see the standing place for Peter the Great and the rest of the czars, but stand he did. Rough religion!
* Boots with high heels are the thing for the fashionistas in both cities and given the size of some of the women in Russia it must be no problem for women without petite feet to find a wide selection of boot wear. Another note for the daughter: the fashion-forward in the cities were wearing a closely fitting Bermuda-length short to work with of course boots or heels.
* The spoken Russian language turns out to be beautiful, which was a tremendous surprise to me! Somehow I had thought, probably from the cold war caricatures of my youth that it was guttural and harsh. Quite the contrary. There are parts of it that sound lilting and at first I thought perhaps some phrases in French were being spoken instead. A lovely language it turns out, which also helps me understand the literature better now.
* The ideal of beauty is the birch tree, as one of our presenters noted because it is tall and thin. An affectionate term in Russian is to call someone your little birch. There were giant pictures of birch trees on the outside of giant hypermarkets near the Moscow airport for example.
* I now have a better sense of the concept of “industrial tourism” introduced to me by one of my daughter’s college textbooks. The hotel where we stayed in Moscow was called the Gamma and was part of a complex (alpha, beta, gamma, delta) built by the Soviets for the 1980 Olympics in order to house the 10,000 Olympians visiting for that event. It was huge, even dwarfing the hotel where we stayed in St. Petersburg that had been run by Inter-Tourist for Soviet group tours and to our good fortune had recently been refurbished on some of the floors.
* Traffic in Moscow particularly is phenomenally bad. A trip from the airport to the hotel that took less than 30 minutes when I arrived after midnight on Saturday took 1 hour 45 minutes when we returned at 2:15 PM on Wednesday.
* On the Cathedral of St. Issac they did not repair the pitted scars of bombing on one side so that there would be a reminder of the terrible siege of Leningrad (one of the earlier names of St. Petersburg).
* As always, people we met routinely spoke more languages and understood (or spoke!) English while we stumbled along in our monosyllables. 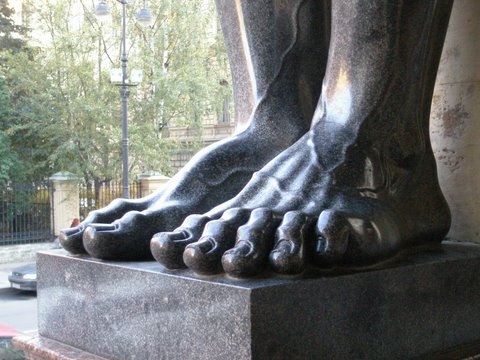 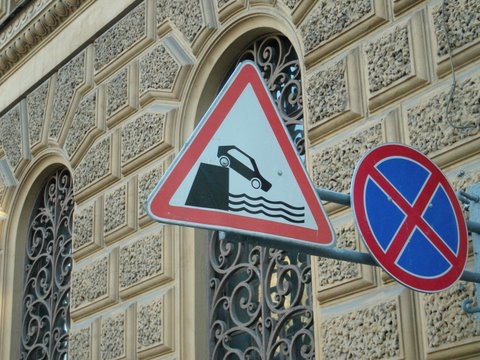 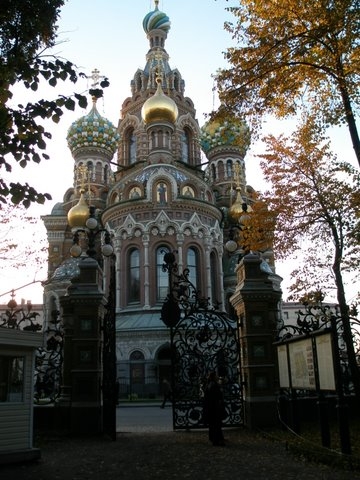