Helsinki         I woke up to a drizzle with fall in full force and Helsinki wrapped in dark and damp and large yellowed leaves everywhere. Walking the couple of kilometers to my first meeting gave me a sense of “downtown” in the city, and I finally figured out that I had not been running around a lake at all, but a spit coming in from the gulf and that rather than being downtown already I was somewhere directly to the east.

From my first few hundred meters I could see that there must be restless youths in this town let loose in the night. There was a red ball of some kind on the nose of first one august and stern seated statute next to the Kansallismuseo, the National Museum of Finland, and then another on a standing figure guarding a building. Tsk, tsk, I thought. Lucky there was no vandalism. Another half a kilometer father there was a striking group of three blacksmith that caught my eye and once upon them, darned if that same gang of kids didn’t put the balls on their noses as well. It almost seemed funny. Later walking down the Esplanade down the hill towards the water and then right to my first appointment with the Finnish Free Churches, there was yet another one of those things on a woman at the base of a statute. These Finns, you figure? I thought no more of it.

Away I went on my rounds first to the Finnish Free Churches, which turn out to be the 78 Swedish speaking “free” churches, and that is to say that they are not part of the “state” church or Evangelical Lutheran church. Next I found myself meeting with Hannu Ohvo of SASK or the Trade Union Solidarity of Finland along with Pekka Ristela of SAK, the largest of the three central federations of unions. It turned out that the SASK operation was the equivalent of the AFL-CIO’s Solidarity Centers and worked mainly, though not exclusively, through global union federations in 40 countries. At the end of Ohvo’s explanation he mentioned that they were trying to expand their funding base and name recognition in the country and one way that they were doing so is that they had acquired the “Red Nose” franchise from Comic Relief in Britain. Had I heard of the Red Nose appeal? The fundraising telethon was scheduled for the end of October in Finland.

I covered myself by mentioning that I had seen a couple of red noses on prominent statutes earlier in the day. Well, Hannu knew nothing of such nonsense, but he was hoping for the best.

Later in the day meetings with Finn Church Aid, one of the other labor federations (salaried workers, so there are class differences even here in heaven!), and a very interesting and large development operation called KEPA laid the groundwork perhaps for the future and fortunately did not find me caught like a deer in the headlines with my red nose blazing in the same way it had in the morning! 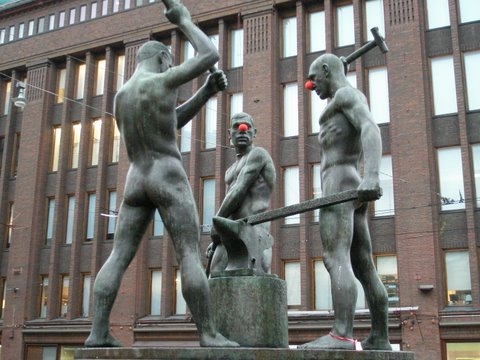 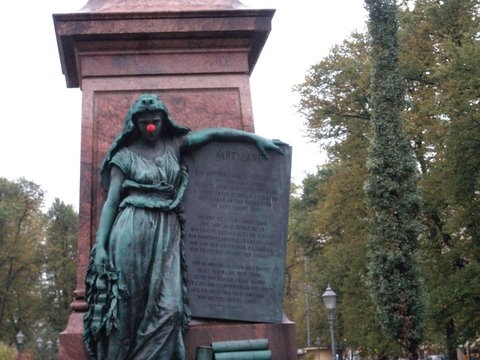