Helsinki          Particularly in St. Petersburg and most dramatically when Maria Kazankova was speaking to us, presenters to the Organizers’ Forum (www.organizersforum.org) delegation acknowledged that intolerance and targeting around immigrants and race were still significant social issues. Lawrence Benito, one of our delegation and an organizer for the Illinois Coalition on Immigrant and Refugee Rights (ICIRR) commented later in his final remarks that somehow he had thought he might get “a holiday from immigrant issues” in Russia, but the opposite had turned out to be the case.

Kazankova had told us that the immigrant and refugee situation was a mockery. There were only 185 registered refugees in St. Petersburg, but she estimated there might be as many as 150,000 in fact living in the city. What rights did they have? None! They could not legally work, receive social security, travel, and get health care or anything else. Many of the immigrants of course were from the new countries broken apart from the old USSR who were now flocking to both Moscow and St. Petersburg because the wages were higher and construction particularly was booming and had enough labor shortages that they would look the other way. It was not uncommon for many of the workers to live on the worksites themselves similar to what one finds in the Middle East or India.

Additionally, there was a problem with diversity. Students were often targeted, those especially from African countries and some had been killed. One of our delegates asked if there was something specific that made them targeted and after a huddle Kazankova simply said, “They stand out.” The meaning was inescapable in these cities of white bread; anyone dark, especially Africans or Indians, would truly stand out. Wilma Neal, one of our delegation and an organizer from UNITE HERE in New York City with laundry workers had commented earlier that she often found people staring at her.

We were primarily in the city centre of both these mega-cities and their millions, so we had no difficulties worth mentioning but heard that there are skinhead gangs in St. Petersburg and other violent types involved in such issues. The state takes a constructive position but in its constant concerns with security, terrorism, and Chechnya has allowed internal enemies to be created around ethnicity and race that are dangerous to civil society and long term stability.

Talking about the role of women was also less than encouraging, even though we met a number of women who clearly were in charge and had status positions. They reported that wages had been equal but under the more capitalistic norms prevailing now had begun to drift into differences. Worse when asked by one of our delegates about the chances that an outside candidate for President, the woman governor of the autonomous province of St. Petersburg, could be elected, neither men nor women thought she had a chance, and even the women seemed uncertain within the Russian culture if they could ever imagine a woman as President. Tatiana Vinogradova, the program director of The Strategy Center, who had been eloquent in talking to us about their work around budget transparency, was both adamant and animated in dismissing the opportunity for women in high electoral positions as impossible to conceive.

Woman may be working hard in the new Russian society and immigrants may be coming from throughout the area to find work, but the welcome mat is hardly out. 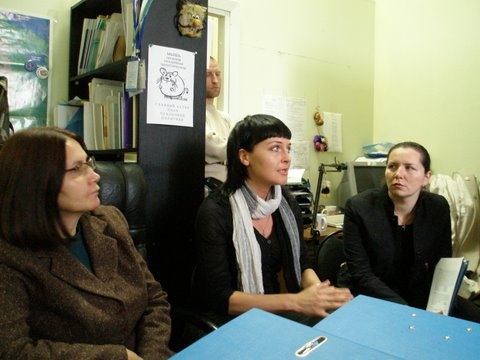 Tatiana Vinograda
Lawrence Benito from ICIRR in Chicago prepares to ask a question as he listens to Scott Reed of PICO asking Tatiana ask one. 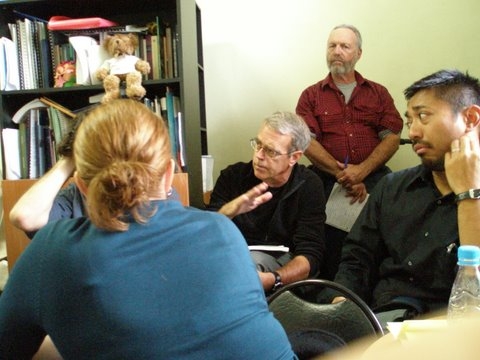