Helsinki         When our forest fighter, Yveyenia, (www.ecmo.ru) explained to our Organizers’ Forum (www.organizersforum.org) delegation where she had gotten her organizational inspiration and sense of tactics, she unhesitatingly said she followed the advice of British nature advocate Gerald Durrell to “take action every day!” Huh? Gerald who? Could you repeat that more slowly, was it Gerald Dahl? Who was this UK organizer that was having such an impact out here on the grassroots activism on the outskirts of Moscow?

A Google search later that night produced no clues as I tried to find Gerald Dahl or Doll or Gerard Dahl or various other combinations unsuccessfully. I went on Yveyenia’s website but not surprisingly her name was nowhere on the site, nor was anyone else’s name, though it seemed from the pictures to match her story. Finally, I sent an email to Denis Petrov in New Orleans at Citizens Consulting, Inc. (CCI), who along with his wife were invaluable in helping put together the final arrangements for our delegation, and asked him to check out the sight and reach out for Yveyenia, find out her last name, ask her who this Gerald might be, and see what we could do to understand this better.

Gerald Durrell died in 1995. I know this through a backdoor Google reference to the fact that he and his more famous brother, the novelist Lawrence Durrell, fought to protect parts of the island of Corfu. There it gave his life span and mentioned that he had written 20 books about nature and similar issues. Gerald Durrell does not exist in Wikipedia. The only direct Google reference is a posing on a New Jersey Library website from someone who says that they had read Gerald Durrell’s books in Russian and were now living in the United States and would love to read them in English, and needed help locating them. There was no reply to his posting, but it will not be easy since Amazon indicates that that Gerald Durrell does not exist, new, old, or used, so it would appear his books are now out of print.

Lacking a better term, I find this instance of “progressive globalization” simply mind boggling! Here is someone famous and taken seriously by dynamic, grassroots activists in a country of 145,000,000 people who has written the “bible” for their work who is completely unknown to us!

This is not the only such example. Alex, our great autoworkers leader from the Ford plant in St. Petersburg had no idea who Bob King, Ford UAW director and former UAW organizing director might be, but he had been to the United States once and went to what he called the “Labor Notes Festival.” Fortunately, someone, somehow, somewhere had also gotten him to a conference of autoworkers in Brazil that seemed to have set him even harder on his path. Add this to the translated version of a CWA manual of unknown date and province (what might Larry Cohen had added if he had thought this might be a guide to Russian workers being distributed through Elena’s totally US-funded NGO?). And, of course put all of this with the story of Liz Vladeck and the way she miraculously brought the new organizing techniques of “home visits” and door knocking to Russia and what a patchwork quilt of our work our Russian brothers and sisters are studying diligently for clues about how to build community organizations, social movements, and unions.

The political irony and contradictions here are huge! Because the progressive forces are so insular and focused on the struggles within our own country (perhaps rightly given our current disproportionate impact on the world!), the arms of the government, foundations, and even the well intentioned progressive internationalists are all reaching out for various reasons, good or bad, noble or base to help the Russian “people” and their organizations often without either the experience or knowledge to find their own butts with two hands. This is all both amazing and amusing.

Add to these ricocheting connections and coincidences two other profound comments made to us. Elena Gerasimova made the very modern point that there was no Russian word that conveyed the meeting of the word “organizing” since this was so far outside of the 20th century experience. In the same way that we often hear that northern cultures may have a dozen words for snow, we only use language to name what we know and do, and if the Russian people were not allowed to organize or build their own organizations, of course it made sense that they would have no word for “organizing” and instead integrate the English word into the Russian accent. Similarly, Anna Sharogradskay in her remarks said that one of the reasons she was intrigued about meeting lay in the fact that we thought about “community” and focused on work there. She regretted the loss of the word and concept of “community” in Russian and argued that it had been forced to recede in “soviet times” to the word “collective” and was somehow thought to be in competition as a concept and construct. I also took from them the notion that state control replaced the value of anything local except as an instrument of the national. The notion of moving from the bottom up that is so critical to organizing (and democratic practice and theory) was inverted to top down (regardless of the ideology) during soviet times.

It is a big world out there, god knows, so it is impossible to believe that we — or anyone really — can control information, so it is fascinating and powerful to observe firsthand how knowledge, learning, and experience all connect in such random ways to produce important and unpredictable outcomes. Progressive globalization is not something most of us spend two minutes considering and in the weird way of the left there has almost become a sense that those who can, organize, and those that can not, travel. In the mainstreams of the progressive movements and work we are often simply ceding work outside our own borders to more marginal, sectarian, and almost adventurist people, groups, and tendencies perhaps feeling that at least they are causing no harm at home, so how much damage could they do abroad.

Reflecting on our Russian experience, this seems selfish and shortsighted. We have come to increasingly understand the impact both commercially and culturally of economic globalization, but somehow have developed a blind spot in thinking about our own work where we are pretending it is not global as well with a separate set of perhaps equally powerful and unpredictable results. Shouldn’t we also try and help work with other organizers and organizations around the world to synthesize and adapt methodology and principles as they translate into local experience, culture, and law? Certainly at the Organizers’ Forum we have come to think that this is invaluable for increasing the insights and perspectives of the US and Canadian based organizers who travel with us once a year, but we can tell two things. First, that it is not supported by funders, so either we have not learned to tell this story yet, or perhaps people simply do not want to hear it, and, secondly, as good an experience as this is for North American organizers, there is not enough “giveback” to the local countries from this dialogue. We have to do better there. 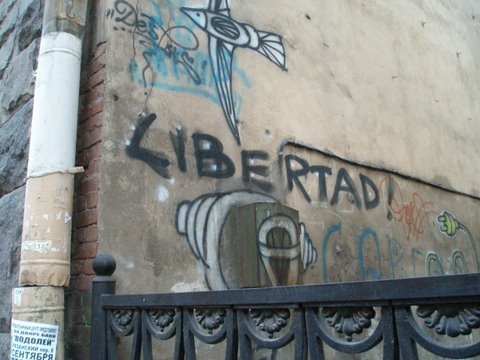 A sign of progressive globalization on a wall in St. Petersburg