Helsinki         Kalingrad is a Russian seaport on the Baltic farther south than St. Petersburg. Of all of the people and stories the Organizers’ Forum (www.organizersforum.org) delegation heard, this was frankly the hardest for me to sort out easily in the normal ways that I would do so.

The narrative of the story is straightforward. The dockworkers of Kalingrad have been agitating and trying to organize an independent union there for a decade after a wildcat strike around 1997 that they won on issues there. Despite their advances and their militancy, they were not able to consolidate their union and the port retaliated by firing a number of workers who were involved in the strike. Some recanted and were allowed back, but others refused and continue to be blackballed on the docks. The union has become marginalized in Kalingrad, but the remaining activists continue to kick up dust from time to time, raise issues about wages, and assist other workers to build independent unions in the area. Ok so far, I understand this pretty well. A righteous situation that then went bad because of an anti-union employer and continues as a skirmish even 10 years later which includes petitions to court and agreements now more than 5 years old that the case will actually be heard by the European Court, which is a first for a Russian labor matter.

Mikhail Chesalin was the leader of the dockworkers in 1997 and in some ways is still reliving that wildcat a decade later. He continues to agitate on the docks and try and get his job back, and in the early summer was beaten and stabbed on the docks for his trouble. He is no lone wolf and has won enough support through his work that he was elected as a member of the regional duma (legislature). In a great piece of poetic justice he out-polled the manager of the docks who fired him, giving the people a chance to weigh in on what they thought of the whole matter. Mikhail seems the hero of this tale and seemed a decent and straightforward guy as we listened to him.

Elena Geramisova is a lawyer and the director of the Center for Social and Labor Rights. She had been working as an intern or staff member of the AFL-CIO’s Solidarity Center when it pulled out of Russia after its director was refused entry back into the country several years ago. She and some Russian co-workers at the Solidarity Center founded this Center and most of their support still comes from the United States. Earlier this year she had spent 5 months in the US on an internship with the National Endowment for Democracy (NED) in Washington. She spoke to us in English, was opinionated and passionate in her positions. Seemingly all of her efforts are focused on supporting independent unions in Russia. She seems to file appeals after appeals for dissident workers, like Mikhail, in trying to bring attention to their situations and cases particularly in the West. Her strategy seems to be a combination of legal attack combined with western leverage. Part of my discomfort was probably a feeling or a fear that for all her energy, advocacy, and passion, she was counting on a cavalry that was simply never going to arrive. Perhaps this is simply a straw that she has no choice to grab within the limited tactical alternatives that exist for organizers in Russia, so I do not say this as a criticism, but more from a sense of foreboding and disappointment, knowing that there really is no cavalry anywhere anymore and its time is past. This seemed more like a “cold war” strategy and more connected to the “old” Solidarity Center almost pre-Sweeney concepts of all unions in Russia were bound to be bad unless they were independent and part of a monolithic anti-commie thing that was really more about the West and even the more narrow American interests of the 50’s than about a current analysis or strategy. I guess what made me uncomfortable was not Elena, who was clearly dedicated and determined and exactly who I would want as my lawyer as I was going down, but more my concern that she was unwittingly acting as an “old school” proxy in a fight that was no longer front and center. She wasn’t being used exactly, but she had taken a path that would only end up along an ally and never the main road.

And, then there was the matter of Liz Vladeck, the organizer who was not there, but whose name appeared several times in this story. Here there are more questions than answers, but perhaps that is true throughout this story of my confusion on the docks of Kalingrad.

First we heard that Liz Vladeck was a former SEIU organizer and later we heard that she was a former CWA organizer. I am not sure that she was really either from what I can tell so far, nor am I sure if it matters. Elena’s story about Liz Vladeck was essentially that she brought “fire to the cave.” She taught them about American organizing methodology. Elena passed around a CWA organizing manual that had been translated into Russian. Liz Vladeck’s grandmother, who recently died, was a famous women’s rights advocate and labor lawyer, did we know her or had we heard of her? Liz Vladeck convinced them to try door knocking workers at their homes. No one believed that would ever work in Russia according to Elena, but, lo and behold, it did! People responded and wanted to talk about work and their issues, even their wives joined in the conversations! And, in the way of Elena’s story, for her time and trouble helping Russian workers, Liz Vladeck was deported back to the United States.

A little Google work produced the following shards to add to this story. Liz Vladeck graduated from law school at Columbia in 2006. She had a one year fellowship-internship that she served with Elena’s organization. She spoke some Russian and was married to a Russian in the States. She was about 30 years old. Her facebook picture with her friends in the US made her look happy. She had written an article in Labor Notes about Mikhail and the dockworkers organizing that was focused on his recent beating. Liz Vladeck was on a one-year visa and her visa application was not renewed by the Russian Federation at the end of the year. There was a Washington Post blog or story from earlier n September that quoted Elena and raised the issue of whether or not Liz Vladeck was part of a series of deportations for activism under the Putin regime. Liz Vladeck’s grandmother died earlier in 2007 in New York City. She had practiced law for more than 60 years and headed the Vladeck law firm with her husband specializing in labor and related law and was no doubt a great woman and a freedom fighter in New York City.

What are we to make of all of this? Is this a special story being spun for the American audience and therefore trying to hit the notes that would appeal for attention and support from the United States? A combination of notes assembled in some part for both the cold warriors and the progressives? Was Liz Vladeck an organizer, an intern, a lawyer or all of these things, more or less? Was she a young woman on one of life’s great adventures adding a chapter at the edge of organizing and intrigue in a country with a rich heritage and affinity for her life and family or all of these things, more or less? Was this a story in Russia, too, and a cause celebre there or a tree that fell in the forest that no one heard except visitors from the United States that might be interested?

I honestly do not know the answers to these questions, so I hesitate to speculate one way or another, but my confusion on the docks of Kalingrad made me uncomfortable and left me head scratching. 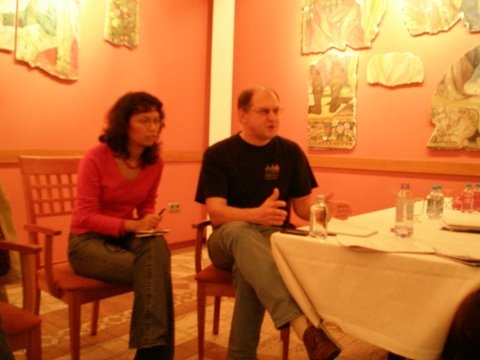 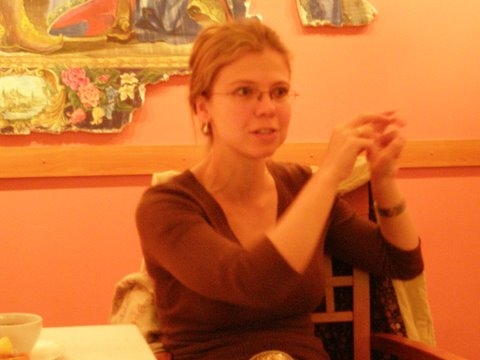