Delhi         A startling piece ran recently in the Wall Street Journal that essentially heralded the end to the “Wal-Mart era” in retail. The front-page piece went right at the core of the Wal-Mart problem: the business model.

The evidence was precise.

Same store sales were falling, revealing a teetering pyramid game where Wal-Mart has to continue to expand in order to maintain the same gross revenues because behind the expansion are quickly falling sales year to year at the stores that are being built. Spokespeople for Wal-Mart continued to say that they would still build 270 odd stores per year and convert as many of their department format offerings to supercenters, but for close observers this is still almost 100 stores less than their projects even 2 or 3 years ago.

Wall Street had clearly long ago fallen out of love with Wal-Mart. Even as the company has continued to grow, the stock has been stalled for years. Investors at best seem bored.

As we have noted repeatedly in the past, Wal-Mart has also been failing in four other venues: international expansion (see India!), public relations (the company is the poster child now worldwide for retail abuses), labor relations (duh!), and in every effort to re-invent themselves with a more upper-income profile. This is a vulnerable company and one that could be leveraged with huge work and great luck.

The reports of their death are certainly premature since they are still the world’s largest employer and at $275 Billion or so in sales pretty much a earthshaking force still. The Journal’s points though are that the competition is gaining and that other companies are competing now with some success to get into the space. Tesco’s foray from the United Kingdom to California soon will be a battle of the titans and worth a watch, and I promise there will be more on this later!

But even if the company is not dead yet, they also clearly do not see taxes, especially property taxes, as inevitable. A great report was released by Phil Mattera at Good Jobs First (www.goodjobsfirst.org ) that found that Wal-Mart routinely challenged the assessments at 35% of the stores they surveyed — and more than 80% in Texas! The company through muscle and bully tactics manages to get its way an amazing amount of the time. Interestingly despite their billions all of this is in service to a savings of a little over $3 million a year from what Phil and his team found. Just another effort in Wal-Mart’s relentless campaign to prove that it can be a bad corporate citizen everywhere it has a store to the woe of local communities and schools that might have thought they could benefit from the property taxes paid by the stores. No rest for the wicked, indeed! 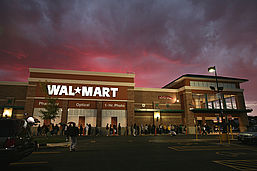