Delhi      UNI stands for Union Network International and is what institutional labor refers to as a “GUF” or global union federation. UNI was having its world executive council meeting at the Asoka Hotel in Delhi as well as the founding convention of UNICOME (India) where our campaign was represented, so we made a point of attending for awhile in solidarity. Dharmendra Kumar, ACORN India FDI Watch Campaign director, was to speak on a panel at the founding convention so this was all good.

We had an opportunity to visit with Chris Ng, UNI’s Asian-Pacific regional director, who had been at the first campaign meeting we had organized in Mumbai two years ago. He was surprised to see the progress we had made, and perhaps more surprised to find out that our Bangalore organizer worked from his office there! We visited some time with one of our allies who heads the All India Traders Association who was sharing the dais with Dharmendra. We saw our friend from FACYS in Buenos Aires who had shared with us their Wal-Mart experience. We talked with members of the bank employees union about the FDI modification facing them. We visited with the two UNI coordinators from New Zealand who have been organizing security workers in India. We saw Christy Hoffman from SEIU who works in Geneva as the UNI property services director. We caught up with the SEIU delegation, particularly the key members of their international team (Debbie Schneider and Carl Leinonen), and in short we did what organizers do!

The founding convention of UNICOME India was of interest to us because we have worked closely with the organizers in Bangalore to support their work in organizing workers at Metro, the big German retailer that has opened there allegedly under the loophole within foreign direct investment (FDI) for “cash and carry” or business to business wholesale. Traders have filed suits on whether or not Metro is really a retail operation servicing the public rather than small businesses, and the progress of the litigation has been both interesting and encouraging to many of them. Wal-Mart considered this alternative as did other companies, but rejected them as possibly not legal. Workers, with UNI’s help, have been organizing at several stores in the area, though they have failed to be recognized by the company to date. There is so little of this kind of new worker organizing of the kind being done by UNI in Bangalore and UNI with SEIU’s support in four other cities that we wanted to support the effort.

None of this is without reservation though. It has been a mystery to us why UNI and its member unions have not been more supportive of our India FDI Watch Campaign, and the politics within the organization have been daunting to the degree that we have virtually given up solving that particular puzzle.. I am also less than convinced that these kinds of small, surgical organizing efforts among the vast sea of the unorganized are really as strategic and broad based as needed, but….

It was any port in the storm for one day in Delhi as we rubbed shoulders with the delegates and wished them well as if we were sailing in calm seas as far as we could see.

Ps. On a related note the vote count is in on the United Federation of Teachers union election where ACORN has been a partner to organize home day care workers: 8580-92! Yes, it’s a movement! Congratulations to UFT/AFT leader, Randi Weingarten, Jon, America, and our team from New York ACORN, and all of the workers with a future now! 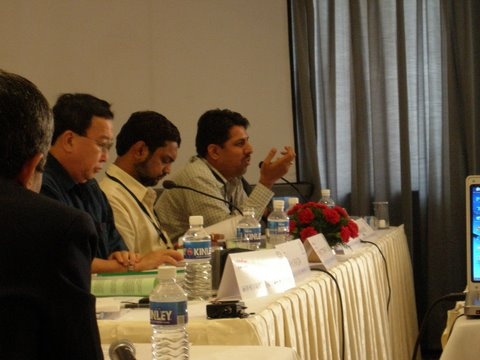 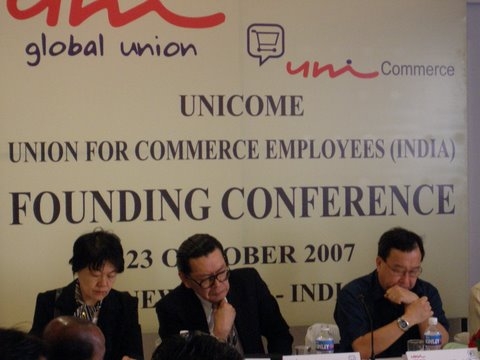